R&B Star, Ashanti Honoured With a Star On the Hollywood Walk Of Fame  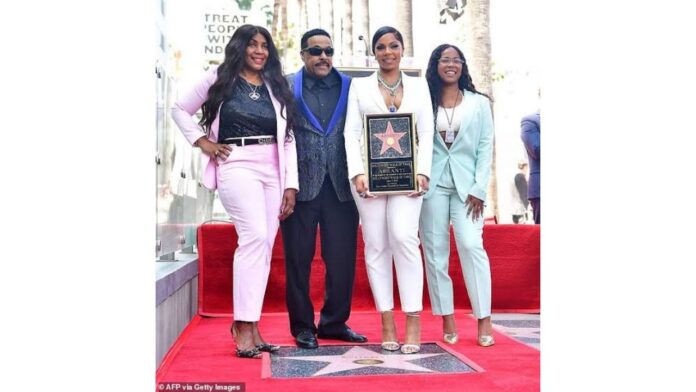 Congratulations are in order for the R&B star, Ashanti, as she was awarded a star on the Hollywood walk of fame in recognition of her musical legacy.

The 41-year-old singer looked dashing as the induction ceremony was live streamed on YouTube on Thursday with Ja Rule and Tichina Arnold conducting the honorary ceremony.

Expressing her gratitude, Ashanti thanked God, everyone in “Team Ashanti”, her family, friends, crew; as well as her fans for getting her to where she was.

On the brink of tears, she recalled how much her mother supported her in the early days as a singer.

“My mom’s first trip to L.A., she walked in this very block and walked into a souvenir shop when I was mixing my first album Ashanti,” shared the artist. “She bought one of the Hollywood stars with the nameplate and got my name printed out on one of them. She said you’re gonna get one of these one days.

“It’s so surreal that I’m getting one of these stars on the Hollywood Walk of Fame forever and ever for my kids to see,”

“It’s still hitting me and I’m still stunned. This is proof to everyone out there that dreams really do come true.” she said according to a report from ETCanada News.

The 41-year-old’s career began with her 2002 self-titled album Ashanti which was immediately a smash hit on release. The album hit the #1 spot on the Billboard Top 200 and R&B album charts. It also set the SoundScan record as the most albums sold by any debut female artist. This accomplishment landed her in the Guinness World Records.

Ashanti won the Grammy for Best Contemporary R&B Album for Ashanti; as well as 2 American Music Awards and the Soul Train Aretha Franklin Entertainer of the Year Award.

Ja Rule also had some words to say about his friend, Ashanti as she got her star. “We’ve shared so many moments together, but this one is so special. Getting a star on the Hollywood walk of fame is at the top of the top.” He said.

Read More Stories About the Life Achievements of American Singers.