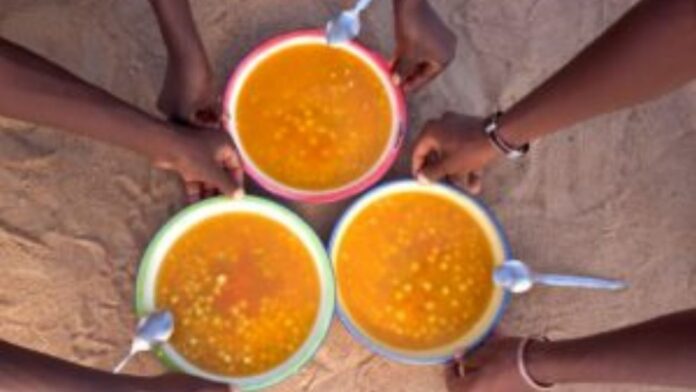 Africa is the home of very delicious, classic, and even spiritual meals. At ILoveAfrica, we love to share very exotic meal recipes from all over the continent, and today we have Umxhanxa.

Umxhanxa is a traditional Ndebele dish, it is mostly eaten by the Ndebele and Kalanga people. It is a seasonal dish often served in winter after harvest time and it is also often eaten for lunch.

Umxhanxa is made by taking a yellow watermelon, known as iJodo, sun-dried maize, and sugar. The maize is boiled with water until the hard grains soften, which usually takes up to two and a half hours.

The yellow watermelon is skinned and sliced, and all the seeds are removed. Then, it’s boiled for 30 minutes. It is then beaten, and the iJodo and maize are combined with sugar.

The ingredients depend on the quantity of Umxhanxa you intend to prepare. However, for a sizeable pot, you’d need;

It is important you know that this cooking process will take almost 2 and half hours. And after your maize is properly boiled up, you have what is called amagwadla – boiled maize grains.

Now comes the slightly difficult part. You’d have to cut the iJodo into strips to enable you to peel the outer part.

When you’re okay with the texture of the melon, you can mix it with a uphehlo (uphehlo is a wooden mixer with wires)