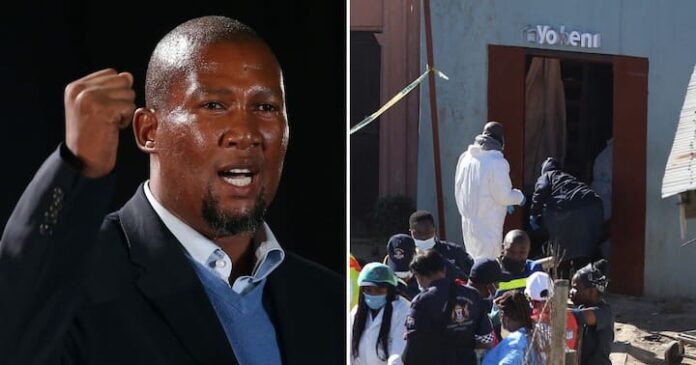 The grandson of former President Nelson Mandela, Inkosi Zwelivelile Mandla Mandela, says Mandela’s royal family is calling for the closure of communal taverns and a ban on alcohol, after at least 20 young men died in East London’s Scenery Park.

According to reports, the Enyobeni tavern was closed after 17 customers inexplicably died there in the early hours of Sunday. Another three died in the hospital, while two were hospitalized in critical condition.

The Daily Dispatch reported initial speculation that the guests had been exposed to some form of poison, as none of the bodies had any visible injuries.

Inkosi Mandela, who is also Village Chief of Mvezo, claimed that the tragedy was not an isolated incident and called for decisive action, including closing community taverns and banning alcohol, to prevent similar incidents.

“It is a source of great concern to parents who are rightly concerned about the scourge of sexual offenses against women, including infants, young children, girls, and even [elderly],” Mandela stated.

“We say that such a justification is a sham, given the innocent lives lost in the Enyobeni Tavern tragedy and other similar incidents.

“We ask CBOs, NGOs, religious organizations and all civil society bodies to demand a ban on the sale of alcohol. It’s time to end those who kill our children and take advantage of the lives of our innocent children.” Mandela said.

Meanwhile, the youth group “LoveLife” has called on Enyobeni’s owner to face the most severe punishment in the law.

The LoveLife CEO Linda Ncube-Nkomo asked authorities to prosecute the tavern’s owner, Vuyokazi Ndevu, who claims he was “not present” during the incident.

In a statement, Ncube-Nkomo said: “This will send a strong message to those who are similarly violating the terms of their operating licenses, which are clearly not to sell alcohol to children under the age of 18.”