Looted Sarcophagus Returned to Egypt After Being Kept In US Museum 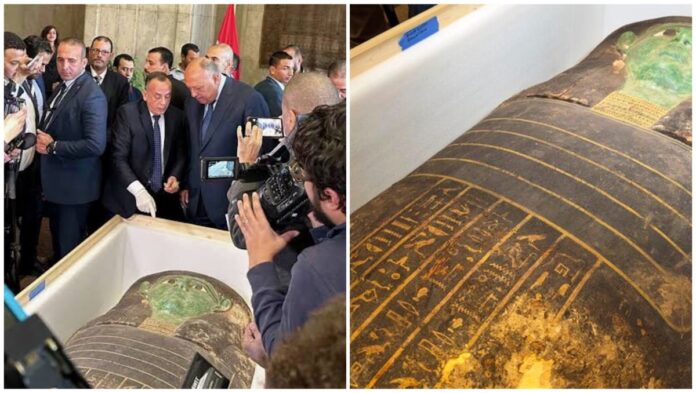 Egyptian officials said on Monday that an ancient wooden coffin(Sarcophagus), located at the Museum of Natural Science in Houston, was returned to Egypt after US authorities discovered it had been looted years ago.

The repatriation is part of the Egyptian government’s efforts to stop the smuggling of stolen antiquities. In 2021, Cairo authorities managed to bring 5,300 artifacts stolen from around the world back to Egypt.

Mustafa Waziri, a senior official at the Supreme Council of Antiquities, said the sarcophagus dates from the late dynastic era of ancient Egypt, an era that dates back to the last rulers of the pharaohs in 664 BC. Until the campaign of Alexander the Great in 332 BC.

Waziri said the sarcophagus, about three meters high and with a brightly painted surface, probably belonged to an ancient priest named Ankhenamat, although some of the inscriptions on it had been erased.

It was symbolically unveiled at a ceremony on Monday in Cairo by Daniel Rubinstein, US chargé d’affaires in Egypt.

The handover came more than three months after Manhattan prosecutors reported the sarcophagus had been looted from the Abusir Cemetery north of Cairo. The artifacts were forcefully taken from Egypt and then craftily taken to the United States through German in 2008, according to Manhattan District Attorney Alvin L. Brag.

“This incredible sarcophagus was trafficked by a well-organized network that looted countless antiquities from the region,” Brag said at the time. “We are delighted that this piece is being returned to Egypt where it rightfully belongs.”

Brag said the same network smuggled out of Egypt a gold-plated sarcophagus that was on display at the Metropolitan Museum in New York. The Met bought the piece from a Parisian art dealer in 2017 for around $4 million. Returned to Egypt in 2019