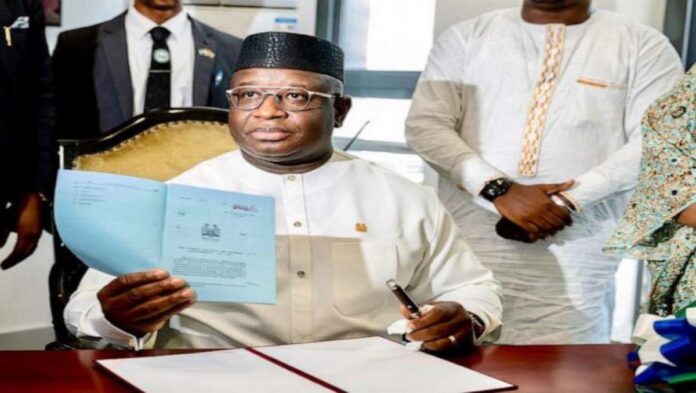 A landmark law went into effect on Friday, requiring women to fill 30% of Sierra Leone’s workforce and government jobs and extending paid maternity leave to 14 weeks.

The law, signed by President Julius Maada Bio, applies to all private sector companies employing 25 or more people. This also includes offices in the public service and ministerial offices.

“Sierra Leone’s future is female,” Bio said as he signed the bill, which was passed in Parliament late last year. “We must do everything to facilitate the timely, full and unconditional inclusion of women in our national life, governance and development.”

The new law’s 30 percent rule does not apply to small businesses and the self-employed who make a living from selling in markets or roadsides.

It also guarantees women equal access to credit and other financial services. Persons who discriminate based on gender face up to five years in prison and fines.

“Like any law, it can be tested and those found breaking the law will be arrested,” said Aisha Fofana Ibrahim, a prominent gender researcher at the University of Sierra Leone’s Forah Bay College.

Charles Vandy, acting deputy director-general of the Department for Gender and Children’s Affairs, said the government will work to publicize the new law.

Since taking office in 2018, Sierra Leonean President and his First Lady, Fatimah Bio have placed a strong focus on the rights of women and girls in Sierra Leone. Efforts included a campaign against child marriage called Hands Off Our Daughters.

According to government statistics, about 30% of girls in Sierra Leone are married before the age of 18. In 2020, the school ban for pregnant young women was lifted, although social stigma is often an obstacle.