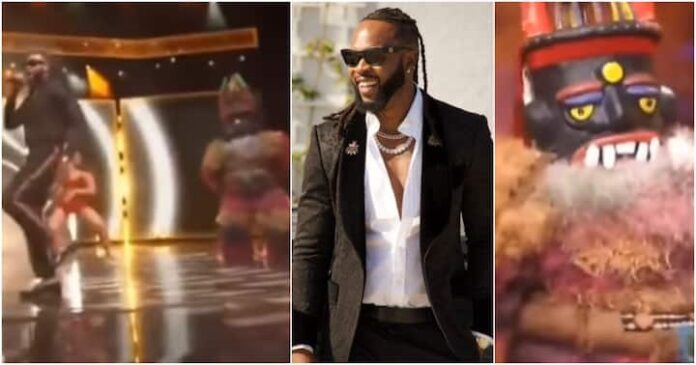 One of Nigeria’s best musicians, Flavour Nabania has proven that he is still very active in bringing his best to the stage.

The singer surprised many during his performance at the recently concluded 15th Headies Awards in the United States.

Flavour performed his hit singles Levels and Egedege at the event, but he didn’t do it alone as he had to invite masquerades who are believed to have special powers and are significant parts of Nigerian spirituality.

Social media users across the country reacted differently to Flavor’s interesting appearance on Headies with a masquerade.

Here are some comments, which you can read below: Iamkelfar: “My best performance of the night.”

Official_sal_francis: “I love Igbo so much to give rise to our culture, good taste.”

Odi_ase: “Someone must feed the disguise to make them super elite.”

Sirwilliams00: “Why is my mind telling me to say the masquerade is white money?”

Babyboy_bcm: “No, be that Cuban high priest who is there asking with such respect.”

The 15th Headies Awards ceremony drew a celebrity crowd as it celebrated the best of African music.

From Asake’s impeccable rendition of “Peace Be Unto You” to Adekunle Gold’s smooth rendition of “5 Star”, the music stars who performed on the show left everyone in awe.