Smithsonian To Return 29 Benin Bronze After Board Votes In Favor 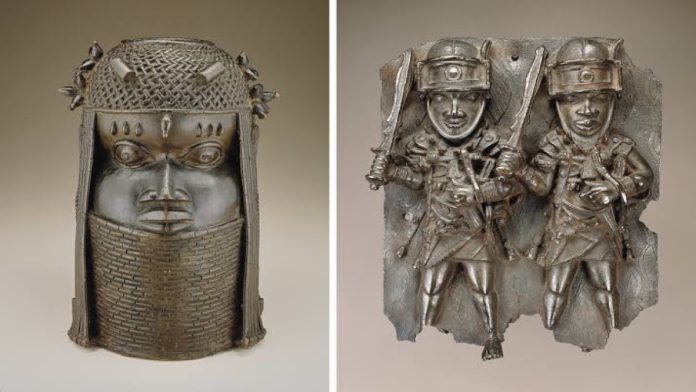 In an attempt to make good on a pledge from earlier this year, the Smithsonian institution is set to return 29 looted Benin Bronze to Nigeria.

After several debates and calls from various organizations for the return of looted items to the shores of Africa, the institution pledged to return dozens but at the time, wasn’t specific as to which and how the process would be done.

However, an important meeting was organized by the institution this week, with members of its “Board of Regents,” voting in favor of the pledge, and a probable first installment, of the return of 29 of said objects to Nigeria.

According to reports, the objects, currently valued at millions of dollars perhaps due to sentimental values, are to be returned to Nigeria’s National Commission for Museums and Monuments.

Though an exact date for the transfer of the objects is yet in sight, it has been noted that the transfer would happen very soon.

Historical records note that the objects in their entirety were stolen from the Benin Kingdom, especially within its famed palace, in 1897. The objects were looted and transported by British soldiers who enforced colonial rules within the thriving kingdom of Benin.

Currently, Smithsonian currently has 39 such recorded Benin artifacts in its collection. With 29 being returned as soon as noted in the announcement, 10 would remain with an expectancy of further interactions that would lead to the return of the rest.

Ngaire Blankenberg, the museum’s director, pulled ten Benin bronzes from view last fall and expressed a wish to restore them to Nigeria. The Smithsonian announced in March that it had reached an agreement with the Nigerian National Commission to return the items, of course, this was subject to the Board of Regent’s approval.

Recall that the institution was working on formalizing a new, institution-wide restitution policy at the time. The policy was based on recommendations from a group of curators and historians who had met the year before to explore the issue under the name of the “Ethical Returns Working Group.”

Museum objects discovered to have been plundered, taken under duress, or otherwise unethically sourced are eligible for return to their nation of origin under the finalized policy.

According to the earlier announcement, the policy is to take effect across the Smithsonian’s 19 institutions on April 29.

Worth noting is that the institution had held its ground previously, stating that as long as it obtained objects legally, there will be no point in the process of deaccessioning.

“There is a growing understanding at the Smithsonian and in the world of museums generally that our possession of these collections carries with it certain ethical obligations to the places and people where the collections originated,” Smithsonian secretary Lonnie Bunch said in a statement upon the implementation of the new policy this year.