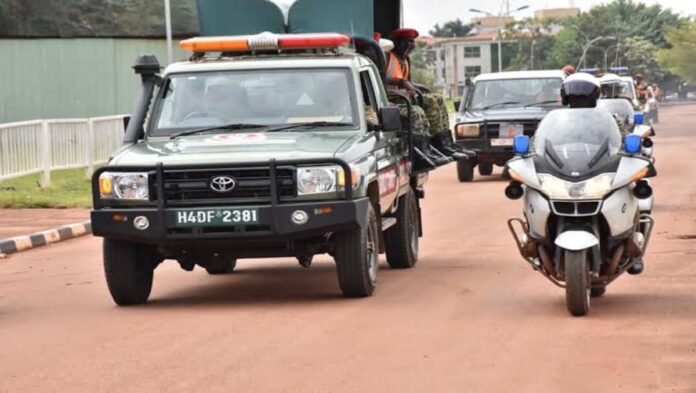 Ugandan police are investigating a case where soldiers stormed a police station in Ndje, Wakiso district outside the capital Kampala on Wednesday night and held officers at gunpoint before releasing colleagues trapped through illegal roadblocks.

The suspects, armed and dressed in military uniforms, allegedly set up an illegal roadblock in Kakola village, Ndege municipality, around 9:30 pm on Wednesday.

The victims reported being assaulted to the police, who dispatched a vehicle with armed personnel.

Upon sighting a police car, the suspects fired several shots into the air. But the officers stood their ground, confronted the suspects and disarmed them.

A source said the suspects, two soldiers, Job Reti and Orit Were, were arrested and are being held at Lumuli Police Station for questioning.

What appeared to be a success for the police was short-lived, however, when hours later a Toyota Land Cruiser, driven by eight armed soldiers, crashed into the station. They asked the police to hand over the two suspects.

The source said that when the police refused, the soldiers drew their weapons, overpowered the officers and freed the two suspects.

Police identified the leader of the group that helped the suspects escape as UPDF sergeant Tony Obio and the other as Pius Lutaya.

Police identified the leader of the group that helped the suspects escape as UPDF sergeant Tony Obio and the other as Pius Lutaya.

Subsequently, the military reported a case at the Mutongo police station in Wakiso district, in which they claimed that the suspects were injured and taken to a health facility for treatment, which they did not disclose.