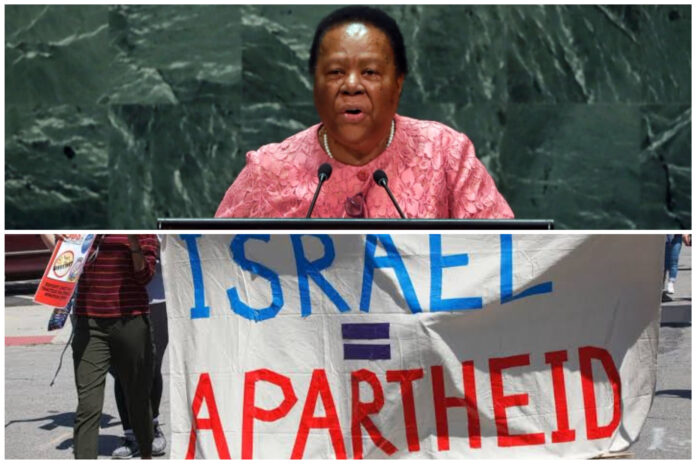 South African Foreign Minister, Naledi Pandor, said on Tuesday that Israel must be classified as an apartheid state and that the United Nations General Assembly must set up a committee to consider whether it meets its requirements.

“The Palestinian novel evokes the experiences of South Africa’s history of apartheid and oppression,” she added. The comments and allegations were made at the second meeting of heads of Palestinian missions in Africa, held in Pretoria, one of the capitals of South Africa.

Pandor was the first government official to denounce the murder of Palestinian-American journalist Shireen Abu Akleh during a May attack in the West Bank. At the time, she compared the violent interruption of Abu Akle’s funeral procession by the Israeli police to the brutality of the apartheid army in South Africa.

Pandor’s claim over Israeli apartheid follows three human rights reports earlier this year that accused Israel—in its control of lands stretching from the river to the sea, including the West Bank and Gaza Strip—of being seen as a regime. Who committed the crime of apartheid against the Palestinian people.

Amnesty International’s latest February report asserts that the Jewish state has been guilty of this crime since its inception in 1948, based on its independent legal analysis. Amnesty International has denied claims that it is criminalizing Israel’s identity as an ethnic national state.