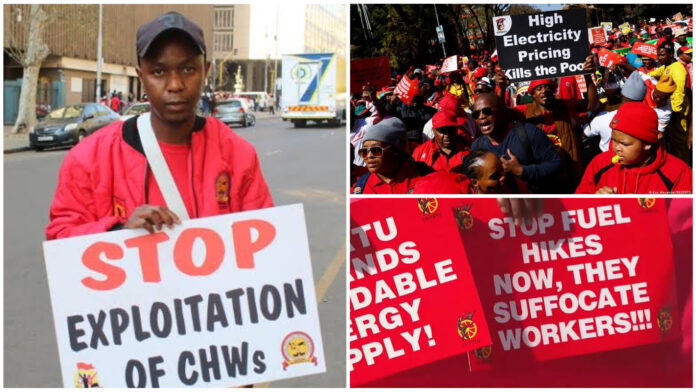 About 1,000 South African workers gathered at the Union Buildings, the seat of government in the capital Pretoria, and urged South African President Cyril Ramaphosa to take action against rising prices and inflation in the country.

The South African economy is still healing from the negative impact of the COVID-19 pandemic, which has caused an estimated 2 million job losses and exacerbated the country’s 35% unemployment rate.

The country’s electricity regulator, the Electricity Supply Commission (Eskom), has called for an increase in electricity prices despite not providing uninterrupted power to industry and homes.

The secretary general of the South African Federation of Trade Unions (SAFTU), Zwelinzima Vavi, led Wednesday’s protests, according to the BBC.

Addressing the people of South Africa, Vavi shared the plight of the current economic crisis.

“We cannot breathe comrades. We can’t breathe when it now costs more than 4,700 rand ($277) to buy groceries for a family of just four. No!” Vavi said.

Moalusi Tumane, a teacher in Palm Ridge, east of Johannesburg, said teachers have been negatively affected by the rising cost of living.

“I wish we could continue the strike for another three weeks, that’s fine. That way they will understand our situation, because for them to hear us, we have to punish them,” Tumane said.

With inflation in South Africa now at 7.4%, the rising cost of living was compounded by constant power outages as state-owned Eskom failed to generate enough electricity.

Another teacher, Linda Gumede, said she could hardly afford basic necessities like cooking oil because of the high price.

“We cannot keep the same salary when everything has doubled. Fish oil (cooking oil) was tripled. How can I buy everything if I have nothing?” she asked.