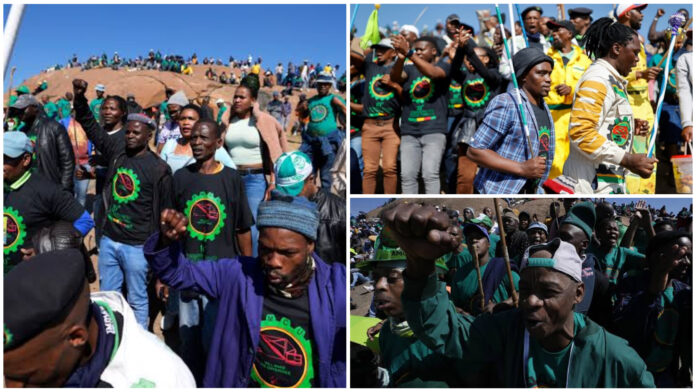 In Marikana, South Africa, thousands of people gathered to commemorate ten years since the deadliest police violence after the end of apartheid, an event that claimed the lives of dozens of striking workers.

On August 16, 2012, 34 people died and 78 were injured when police opened fire on platinum miners who had gathered on a hill near the mine to demand better wages and housing.

“10 years of betrayal,” read T-shirts worn by many at Tuesday’s memorial, expressing resentment at the lack of justice for the dead and promises of better wages and conditions for miners not being met.

On a small hill about 100 kilometers northwest of Johannesburg, where the shooting took place, miners sang songs and mournful chants. The strike was led by the miners’ union and the construction union, which is why many attendees donned green and black to the ceremony.

An official inquiry attributed most of the deaths to police tactics and concluded that an operation to remove the miners should not have been carried out.

It also absolved high-ranking government officials of any blame.

President Cyril Ramaphosa, who at the time was non-executive director of Lonmin, which operated the mine, was also dismissed.

At the protest, Association of Miners and Construction Union (AMCU) president Joseph Mathunjwa emphasized the importance of the present rather than the future.

The Independent Police Investigation Directorate, said the incident is still under investigation.

The victims’ attorney Dali Mpofu demanded that a memorial be built for those who died, saying, “You must apologize.”

Authorities claimed that despite having already given the relatives of the victims almost 76 million rand ($4.6 million), they are still processing dozens of petitions for compensation.

“We have to be strong men, in the end the truth will come out even if we don’t remember who was responsible for the bloodshed in Marikana,” said Mzoxolo Magidiwana, a massacre survivor who escaped with nine gunshot wounds.

Although, no government officials attended the event.