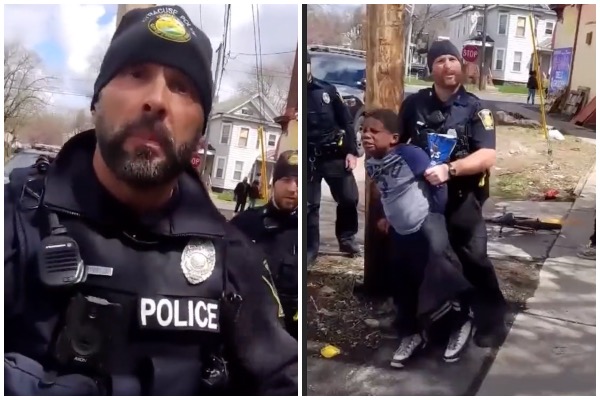 This week, a video of an 8-year-old kid being reportedly arrested by Syracuse, New York police officers over a stolen bag of chips went viral, causing uproar online.

Kenneth Jackson, who watched three white officers arresting a Black child in Syracuse on Sunday, taped the video and uploaded it on Facebook. A segment of the video was eventually re-posted on Twitter, where it has received 5.3 million views.

One cop grabbed the boy’s arms behind his back while he yelled and wailed in the dramatic scene.

The video opens with the bystander asking the police what they are doing.

“Guess. Take a guess what I’m doing,” the officer holding the boy responds.

“He looks like a baby to me,” the bystander says before he and the officers begin shouting at each other while the boy is led to the back of the police car. The boy can be heard crying from the car while the bystander continues to engage with the police.

In a statement released Tuesday, the Syracuse Police Department recognized the footage, saying it showed police and minors accused of stealing from a store on the city’s North Side.

“The incident, including the Officers’ actions and body-worn cameras, are being reviewed,” the statement said, adding there had been some misinformation being shared about the incident and that the boy, who was suspected of larceny, was not handcuffed.

The statement added officers brought the boy home and spoke with his father. No charges were filed.

Lt. Matthew Malinowski, a police spokesperson, confirmed the boy’s age to Insider and said more information from the police and the mayor would be given on Thursday.

Anthony Weah, the boy’s father, told Syracuse.com that he had met with police at his home to discuss the event. Weah said the officers were nice and informed him that his sons had been accused of stealing chips from a business.

He didn’t see the footage of his son crying on the internet till later.

“Why would the police treat that child like that?” Weah said to the outlet. “Over a $3 bag of chips.”

Weah told Syracuse.com he wants to file a complaint over the incident. He did not immediately respond to a request for comment from Insider.

“The policeman, they are not children,” Weah said, adding: “They are not boys, they’re men.”