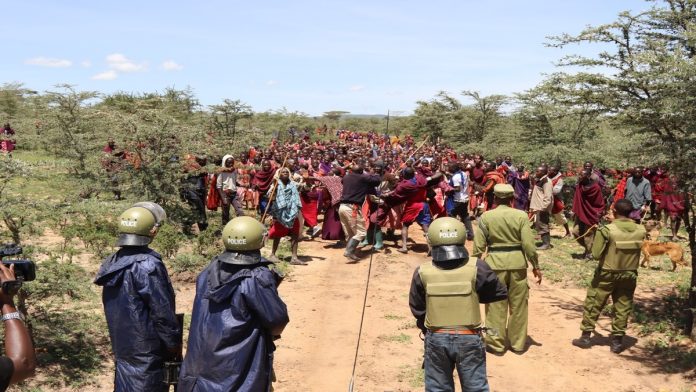 The Tanzanian government has moved to evict the Maasai people from their ancestral land to make way for a Game reserve.

According to reports, tension has been growing at a drastic level since officials accompanied by police men arrived at the scene with the intent to evict those who occupy the area.

Sources claim that the Police personnel were supposedly brought to the scene by government officials to evict the Maasai tribes people from their ancestral land to make way for the development of a game reserve.

Several Tanzanians have come on social media to react to the presence of officials at the scene, especially as the game reserve is said to belong to the United Arab Emirates (UAE) royal family.

Survival International and the Oakland Institute both shared videos on social media with hopes of getting more attention on what many have tagged an “unjust treatment of the people in the Loliondo division, including the continuous presence of police personnel in the villages of Ololosokwan and Kirtalo.

The videos, as shared on social media, showed smoke and sound of gun fire in the background as the Maasai people were seen running for their lives. While the videos shared online were followed by saddening captions, graphic images were also attached by some social media users, with many Maasai people shown to have sustained gunshot wounds.

Although the authenticity of the content of said “graphic images” are yet to be verified by “Down to Earth,” a concerned organization that has followed the unfortunate incident from the onset.

A report by the Oakland Institute claims that “The arrival of a heavy police force signals the government has moved forward with plans to change the status of the Loliondo Game Controlled Area into a Game Reserve, which would trigger mass evictions of Maasai living in legally registered villages within the area.”

By the way, Survival International is a global organization dedicated to the rights of indigenous and uncontacted peoples. “Bringing creative ideas and bold action to the most critical social, economic, and environmental concerns of our time,” according to the Oakland Institute, an independent policy think organization.

Recall that earlier this month, Tanzania’s Ministry of Natural Resources and Tourism announced plans to convert many Game Controlled Areas to Game Reserves.

The questionable actions and presence of police personnel started when the country’s natural resources and tourism minister arrived in Arusha to “inspect the activities of the Loliondo Game Reserve,” indicating that the area’s status had been changed.

Sadly, despite the company’s historical involvement in multiple violent Maasai evictions, Oakland reports that the UAE-based “Otter lo Business Company” — which organizes hunting excursions for the country’s royal family and their visitors — will purportedly supervise commercial hunting in the area.