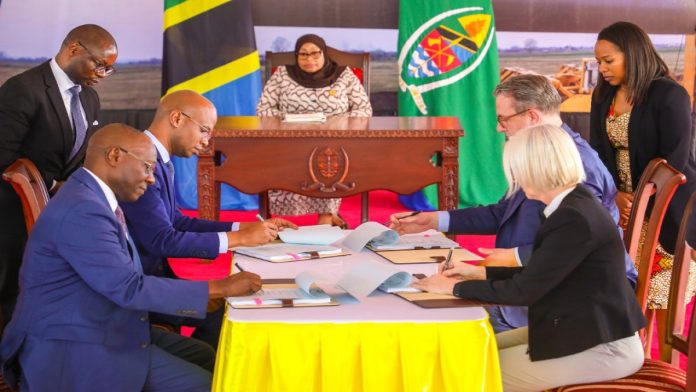 Tanzania has signed a Natural Gas deal with Britain’s Shell and Norway’s Equinor. According to reports, the deal is expected to bring the country closer to starting the construction of a $30bn structure that will help in the exportation of liquefied natural gas (LNG).

The deal was announced earlier on Saturday by officials, who claimed that it is a good step in the right direction. The officials further stated that the process has only just begun, as further investment decisions are expected to be made public by 2025.

However, operations and construction of a liquefied natural gas plant are expected to begin in 2029-2030 and will be built in Tanzania’s southern coastal town of Lindi.

The impressive deal comes just months into Tanzania’s open decision to move the exportation of its vast gas deposit even further in years to come. According to sources, the East African nation is blessed with a vast gas deposit estimated to be at least more than 57 trillion cubic feet (1,630 billion cubic meters).

“We have never reached this stage of natural gas development in the history of our country,” Energy Minister January Makamba said during the signing ceremony in the capital Dodoma.
“This project will significantly change our economy,” Makamba said.

Makamba explained that Tanzania’s strategic position will prove very useful in exporting the country’s abundance of natural gas to nations in need, especially if said nations are Asian countries looking to diversify their natural gas reserves.

While Equinor is exploring a block 100 kilometers (62.14 miles miles) off the coast of Lindi, it has taken ExxonMobil along on the exploration, where both claims to have discovered 20 trillion cubic feet (566 billion cubic meters) of natural gas.

Shell, on the other hand, claims to have discovered 16 trillion cubic feet (453 billion cubic meters) of gas in two offshore blocks in the same area as Ophir Energy and Pavilion Energy.

While the economy of Tanzania was greatly affected by the Coronavirus pandemic due to restrictions and the high price of goods, the country seems to now be getting its foot back on the brakes as its natural gas industry and exportation are expected to make up for the disaster of the pandemic on the country’s tourism industry.