Nigeria’s Tems Credited On Rihanna’s “LIFT ME UP”, A New Single Off The ‘BLACK PANTHER 2’ Soundtrack 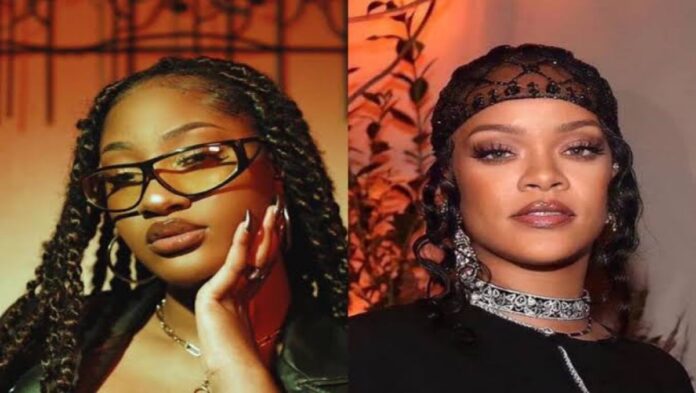 6 years after her critically acclaimed album ANTI, Rihanna has taken a much-needed break from releasing solo music while immersing herself in a wealth of business ventures.

With the exception of “BELIEVE IT” from PartyNextDoor’s “PARTYMOBILE,” Rihanna has stayed aloof from the scene, dodging album requests from interviews and her social media comments section.

Finally, the music and business mogul brings herself back onto the scene with a single for Black Panther 2: Wakanda Forever.

“Lift Me Up,” the lead promotional single for the highly anticipated film, features scriptwriting by BET Award-winning singer-songwriter Tems.

Speaking of Lift Me Up, Tems says, “After speaking to Ryan and hearing how he directed the film and song, I wanted to write something that would be a warm hug to all of the people I’ve lost in my life.

I tried to imagine how it would feel if I could sing to them right now and express how much I miss them.” Speaking of working with Rihanna, Tems says, “Rihanna was an incredible inspiration to me, so it’s a big one Honor to hear them broadcast this song.”

News of Tems’ collaboration, which will be released on October 28, comes shortly after Nigeria was set to host the African premiere of Black Panther 2: Wakanda Forever in Lagos and months after the release of the film’s trailer, which features a cover by Bob Marley’s No Woman No Cry by Tems.

The track was also accompanied by “A Body, A Coffin” performed by Ghanaian sensation Amaarae. Watch the Black Panther 2: Wakanda Forever trailer ahead of its November 11, 2022 release.