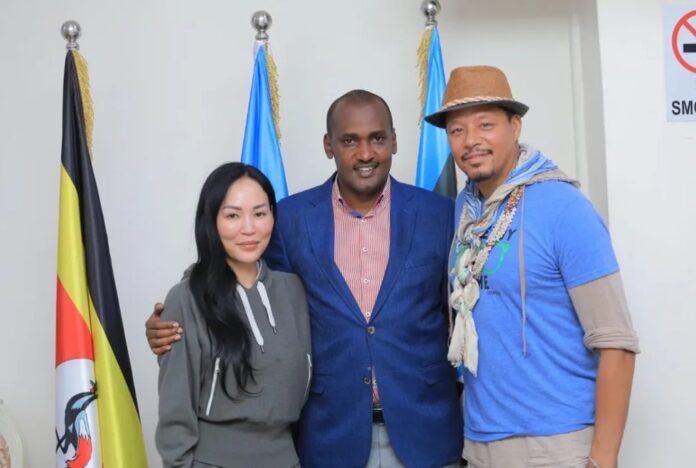 Renowned American actor, Terrence Howard, and his wife, Mira Pak have both made their first visit to Uganda. The actor revealed his plans to develop a new hydrogen technology in the country with the help of the local authorities.

Howard was invited by Frank Tumwebaze, Minister of Agriculture, Livestock, and Fisheries for Uganda.

Tumwebaze said in a tweet that the famous actor and techpreneur will “explore and popularize Uganda’s uniqueness” during his visit.

“I am pleased to welcome our friend from Uganda, Mr. Terrence Howard and his lovely wife in #PearlofAfrica.

Terrence is a famous American actor and a technology-prenuer. He will #Explore the uniqueness of Uganda and spread the word,” said the Minister of Agriculture in a tweet announcing their visitation.

During the meeting, President Museveni welcomed Howard and assured him of any support he might need to implement several of the projects he highlighted to be his intended projects for Uganda.

“I appreciate the initiative and will give you land if you need it. Ministry personnel should show you around and see where the project fits best. We are ready to work with you on our side,” said Museveni.

Terrence proceeded to thank the president for his “great leadership” and a strong pan-African spirit, which he said allowed him to play a central role in the unification of Africa.

“I am pleased with my visit to Uganda. It was one of my dream destinations in Africa. Thanks to my friends Hon. Frank Tumwebaze and Isaac Kigozi for their hospitality and support thus far,” said Terrance.

As a scientist, Howard revealed plans to invest in the ICT sector, entertainment industry and real estate, among others.

“I received 96 patents in science and technology and discovered a new mathematics. My goal and mission is to bring balance to our planet, restoring a safe place for the animal kingdom to thrive and ushering humanity into a new era of truth, love and consciousness.”

“I want to develop a new hydrogen technology in Uganda. The main objective of the project would be to defend the sovereignty of the country in terms of technology.”

He noted that he hopes to further explore Uganda’s heritage in the countryside, including visiting ankole cows and gorillas.

“Uganda is a beautiful country and its people and food are great. I promise you, Mr. President, that when I return, I will let the world know about Uganda’s beauty and tourism potential.”

Howard was welcomed to the country earlier this week by Agriculture Secretary Frank Tumwebaze and his wife and is expected to hold meetings with other government officials and conduct tourism activities across the country.

Born March 11, 1969, Terrence landed his first major film role in the 1995 films Dead Presidents and Mr. Holland’s Opus. Between 2004 and 2006, he broke into the mainstream with a series of television and film roles.

He played James “Rhodey” Rhodes in the first Iron Man film, and also played the lead role in Lucious Lyon in the television series Empire.

Tourism enthusiast and entrepreneur Amos Wekesa has welcomed the move of such high-profile celebrities and stars to visit Uganda.

“Our neighbors Rwanda, Tanzania, and Kenya have these types of people visiting every week and showing their beauty. That kind of engagement has great value for all of us over time,” he added.