The Culture of Basotho 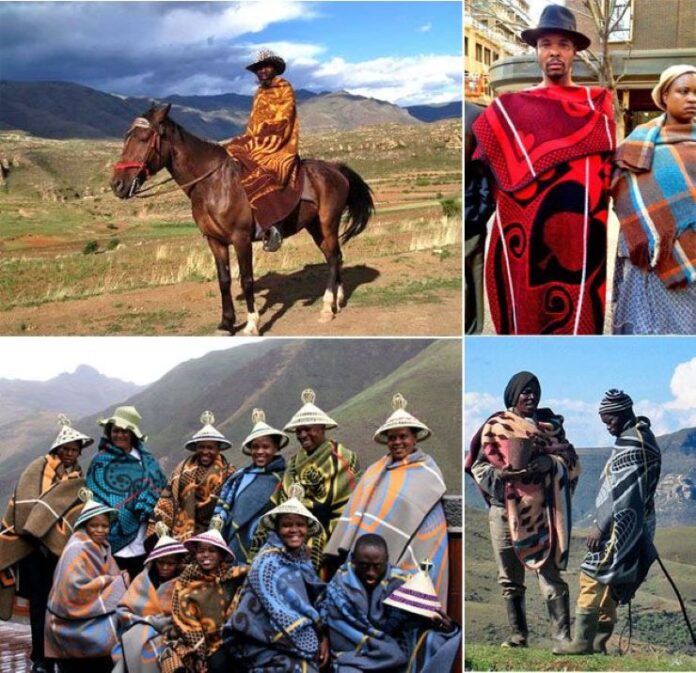 The people of Basotho take pride in their extensive cultural heritage, with roots that go back to the Stone Age often referred to as Sotho speakers.

Sesotho is the official language of Lesotho, and the majority of its citizens are Basotho, though almost all have great English language skills.

Despite the fact that many Basotho continue to work and live abroad, they have a strong affinity to their home village and traditional culture.

The family is still the fundamental social unit, and respect for the elderly is crucial. The majority of Basotho traditions and holidays are tied to seasonal changes and local village life because Basotho culture is mostly based on village life.

The Matabele have maintained their customs and traditional dance the best out of all of our people.

The vibrant dance known as Ndlamo is now a popular way to celebrate across most of Lesotho, where no traditional wedding would be complete without it.

Sesotho is the official language of Lesotho, and the majority of its citizens are Basotho, though almost all have great English language skills.

Since the majority of Basotho people live in mountainous rural areas, traveling in this mountainous region can be quite difficult. Nevertheless, the Basotho pony is perfect for getting around town, therefore it’s crucial to raise and ride these steady horses.

It is not uncommon to encounter a Basotho horseman in the towns as well as the mountains who is wearing his customary kobo, or blanket, and who will extend his hand in the traditional greeting “Khotso,” which means peace.

The culture of the Basotho people is unique. They are one of the few African tribes that reside in a mountainous area, and they have developed several adaptations to suit their needs. One such is the Basotho blanket.

You will find people wearing wool blankets, frequently with lovely patterns, all around the nation. This is the perfect outfit for a cold area because it can keep the rain off and is also versatile.

The Bataung, Basia, Bafokeng, Makgolokoe, and Bakuena et al. are some of the clan names that the Basotho use to identify and relate with one another. The Bakuena make up the majority of the Lesotho royal family.

These tribes coexisted peacefully until 1822, when fugitive Nguni from Natal came and overran them.

After it, there was a period of political unrest during which tribes were split up and dispersed over various lands. Other tribes followed the Sebetoane, while the Tlokoa tribe followed the Manthaisi.

When troops headed by Shaka and Mzilikazi attacked these tribes, they suffered severe losses. Following Moshoeshoe, other tribes traveled deeper south into the nation in search of safety at the impregnable Thaba-Bosiu.

All individuals who had survived the assaults were welcomed by Moshoeshoe, who was able to establish the modern-day Basotho country. He is supposed to have once had control over the entire Free State, from what is now Lesotho.

The use of totems or family odes (Liboko), praise songs or poetry (Lithoko), and storytelling (Litsomo) are all deeply established in Basotho oral history. Names of families, clans, or totems are referred to as liboko.

These provide a clear history, philosophy, and the genesis of each tribal group. Clans are recognized and distinguished from one another using family odes.

Lithoko were influenced by conflict and combat. They were mostly concentrated on and based on outstanding chiefs who guided their people to victory in conflicts and battles.

They are also referred to as praise songs, and they contain explanations of the past, mentions of historical occurrences, and even references to mythological belief systems.

Also read: Intonjane, the Xhosa Rite of Passage Into Womanhood

The Basotho practice agriculture. There will be numerous fields all around the hamlet, and the chief allots these to the inhabitants.

Numerous crops are grown, including vegetables like onions and cabbage as well as maize, wheat, sorghum, beans, and peas.

In Basotho society, animals play a significant role. Donkeys are frequently utilized as pack animals, but the finest mode of transportation in the mountains is the Basotho pony. The majority of families will own some cattle, and oxen are utilized to plow the steep fields of the mountains.

Both mohair from Angora goats and wool from Memo sheep are important sources of revenue, and you may find large herds of both on the mountains.

They are cared for by shepherds, frequently young boys, who reside in basic huts known as motebo that are frequently located on ridges at elevations well above 3000m and are well camouflaged.

You will usually see a flag hanging from a tall pole as you pass a village. This denotes a location where something is for sale. A white flag denotes “joala,” a regional sorghum drink. Red denotes meat, green refers to vegetables, and yellow denotes maize beer.

For the most part, agriculture and animal husbandry provided the Basotho with their nourishment. While women worked in the fields and collected water from springs, men and boys would take care of the animals and ensure their well-being.

Maize, millet, melons, pumpkins, peas, beans, and ground nuts were just a few of the many foods that made up the Basotho diet. Sheep, goats, poultry, and cattle were the main types of domesticated animals, with cattle being the most desired.

They were happy to have a change in their diet thanks to the seasonal availability of wild berries and other fruits. The Basotho society placed a high value on traditional alcohol, also known as jwala, especially during religious rites.

Depending on the occasion or the wearer’s age, the Basotho traditionally dressed in various ways. In the past, young girls would dress in thethana ea banana, a frock made of clay beads, and sefaha sa letsopa, a neckpiece made of clay beads.

When a woman reached adulthood, she would wear a skirt made of woven fabric or a mose oa lekoko (cow hide skirt). Young males would wear tseha, a sheepskin undergarment that was cut into a triangle shape and knotted around the torso to protect the private areas.

This garment would grow longer with use, covering more of the legs. Men used to wear animal skin blankets as well. This blanket was created for chiefs from the skins of wild cats or the so-called lehlosi leopard. Men also wore the setipe and mokhahla blankets.

The Basotho are renowned for their hats as well. While some of these hats are constructed from animal skins, the bulk are created from straw and leaves. The mokorotlo is the one that is most known among these.

This hat has a conical shape and was constructed from moseha grass. Its shape is supposed to have been modeled after the Qiloane Mountain in Lesotho, which is close to Thaba Bosiu.

Moliha-nyeoe and ts’ets’e are two further types of hats. Kuoane, kharetsana, and sekola are a few examples of hats constructed from animal skin, with sekola typically being worn by warriors.

Within Basotho tradition, initiation school used to be very important to the development of young adults. Both boys and females came of age when they attended initiation school. Everyone had to experience this rite of passage.

Girls and boys were taught how to be contributing members of society in these schools. While the girls learned how to run a home, the lads learned endurance and bravery. Boys became men and girls became women at initiation school.

The way of life of the Basotho was seen as straightforward and uncomplicated. The complexity of their social and political institutions can only be seen and comprehended when a deeper look is taken.

One cannot take for granted the part that each person played in the development of not just their immediate family but also the entire village and society. In order to educate the village’s young people, the elders would gather around them and tell them tales that were deep in myth and magic.

Each clan would announce its own praises that talked of their origin, and great warriors and conflicts had praise songs that represented the combat scene and the events that happened as a method of documentation.

Most parts of Basotho culture changed as a result of the arrival of the missionaries and subsequently modernization. While certain components of the old ways of doing things have been abandoned or changed over time, the majority of them still exist today.

Despite everything, the Basotho are still regarded as a peaceful people; this is a legacy that their founder Moshoeshoe left for them and will be passed down for many more generations.