The Historical city of Great Zimbabwe 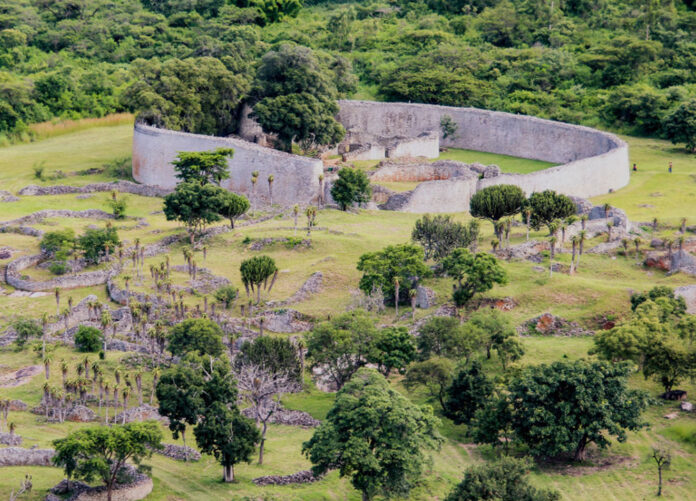 Great Zimbabwe was an ancient African metropolis distinguished by its massive circular wall and tower.

The name Great Zimbabwe refers to the stone remnants of an ancient metropolis near modern-day Masvingo, Zimbabwe.

The architectural method is unique in African architecture, and while similar work may be seen elsewhere, none is as differentiated and intimidating as Great Zimbabwe.

It is an edifice that resembles that of prehistoric peoples and is unmistakable of Bantu origin. Zimbabwe translates as “stone house” in Shona.

The heavenly soapstone figures, known as the Zimbabwe Birds, discovered within the ruins attest to the site’s use as a place of devotion from antiquity to the current day.

The center portion of the ruins covers around 200 acres, making Great Zimbabwe the largest of more than 150 important stone ruins spread across Zimbabwe and Mozambique.

Excavations have uncovered glass beads and porcelain from China and Persia, as well as gold and Arab coins from Kilwa, demonstrating the scope of long-standing trade with the outside world.

Other evidence, such as potsherds and ironware, sheds light on the property’s socioeconomic complexity as well as farming and pastoral operations.

People first settled in Great Zimbabwe at approximately 1100 C.E., but the metropolis became completely desolate in the 15th century.

From the 11th through the 15th century, it was part of a powerful African trading empire that ruled much of the East African coast with an economy strongly built on cattle husbandry, agricultural cultivation, and gold trade on the Indian Ocean’s coast.

According to legends, Great Zimbabwe was either a royal home or a symbolic grain storage facility. In Shona, Zimbabwe means “stone houses.”

With the fall of the city, stone working and pottery-making techniques appear to have spread southward to Khami (now also in ruins).

The ruins were undoubtedly discovered by Portuguese explorers in the 16th century, but their presence was not established until the late 19th century, sparking extensive archaeological research.

These explorers couldn’t believe that such a paradise could have been built by black Africans. Plus, they thought it was the legendary city of Ophir, the location of King Solomon’s mines.

The site was widely and incorrectly attributed to ancient civilizations such as the Phoenician, Greek, or Egyptian because of its stonework and other indicators of advanced civilization.

Great Zimbabwe served as the capital of the Shona (Bantu) commercial empire known as the Kingdom of Zimbabwe.

Great Zimbabwe was a part of a vast and prosperous worldwide commercial network. Archaeologists discovered Chinese and Persian pottery, as well as Arab coinage, amid the ruins.

The distribution and number of homes indicate that Great Zimbabwe had a huge population, estimated to be between 10,000 and 20,000 individuals.

However, by the 15th century, the city had been virtually abandoned as the Shona people went elsewhere. The precise causes of desertion are unknown, but resource scarcity and overcrowding are likely some factors.

The Great Zimbabwe archaeological site is divided into portions. The first portion is the Hill Complex, a collection of structure ruins perched atop the site’s sharpest hill.

The Hill Complex is widely assumed to have been the site’s religious center and it is the earliest component of Great Zimbabwe, with construction evidence dating back to roughly 900 C.E.

The complex might have served as a religious site or a place of burial for chiefs in a later era. Alternatively, it could have always been a holy location where ancestors were worshiped and sacrifices and votive offerings were made.

However, there are remains of mud houses with stone foundations on the acropolis, which could have been used as royal homes.

The Hill Complex was enclosed by a dry-stone wall of granite, a stone that occurs locally and can be readily and naturally divided into rather consistent slabs measuring 19-39 inches in thickness.

The walls are nearly 32 feet high in sections, and the enclosure is 820 feet in circumference. The walls were constructed without mortar, relying on perfectly shaped stones to hold the structure of the wall.

It follows the same curve as the outside walls and ends in a 33-foot-tall stone tower. While the purpose of this enclosure is unknown, archaeologists believe it was either a royal dwelling or a symbolic grain storage facility. It is also one of the largest ancient sub-Saharan Africa.

For increased stability, the wall slopes slightly inwards, and regular channels run through the base to drain the level inner space.

There is also a primary entrance portal facing the Hill Complex, as well as several others, implying that the walls have no military or defensive purpose.

Inside, there is a second wall that forms a tight passage in sections as it follows the outlines of the outer wall and leads to a large stone monument or tower.

The exact purpose of the construction, which has a total circulation of about 250 meters is unknown, but it could have been a royal dwelling with the tower serving as a granary (grain being a common form of tribute and used by Shona rulers to present as a gift).

The third section is the Valley Ruins. The Valley Ruins are a substantial number of mud-brick (daga) dwellings near the Great Enclosure.

The Shona, a Bantu-speaking people who initially came to southern Africa in the 2nd century CE, founded the Kingdom of Zimbabwe, with Great Zimbabwe as its capital.

The kingdom’s exact boundaries are unknown, although its stronghold was in central Mashonaland (northern Zimbabwe).

The Zimbabwe plateau region, located between the Limpopo and Zambezi rivers in the south and north, is made of temperate grasslands free of the tsetse fly, yet rainfall has always been variable, with the possibility of drought at least once per decade.

The following is a general history of the region in the millennium preceding Great Zimbabwe’s peak. Domestication of sheep, goats, and cattle dates back to the third century BCE, however, it did not become prevalent until the first century CE.

Small bands of nomadic hunter-gatherers had certainly inhabited the area long before Shona pastoralists arrived with their livestock and iron-smelting technologies, and the two groups would continue to battle for territory far into the modern age.

By the 7th-9th centuries, villages had formed in a pattern that would last until European immigrants came in the 16th century.

Salt, a valuable and necessary commodity in the Zimbabwe monarchy, was also traded in the region. There are also glass beads and seashells discovered, indicating trade with the coast even at this early age.

Unfortunately for posterity, during the European colonialists’ activity in the area in the 1890s, the site of Great Zimbabwe was systematically robbed of anything of worth.

Those artifacts that have made their way into the public eye nearly invariably lack information about the circumstances in which they were discovered.

The Shona peoples had migrated a few hundred kilometers northwards by the second half of that century, forming a new kingdom, the Kingdom of Mutapa.

In the remains, archaeologists discovered many soapstone bird sculptures. These birds are believed to have served a religious purpose and were possibly mounted on pedestals.

These birds are national emblems of Zimbabwe and can be found on the present Zimbabwean flag.

There have only been a few archaeological digs at the site. Unfortunately, major plunder and damage occurred at the hands of European visitors in the twentieth century.

Although they were eager to investigate and steal the ruins of Great Zimbabwe, European colonists believed the city was too complex to have been built by Africans, and instead assumed it had been created by Phoenicians or other non-African people.

Despite the destruction done by these colonial looters, Great Zimbabwe’s heritage continues on as one of Africa’s largest and most culturally significant historical monuments.

Some say religion was the catalyst for the city’s growth to dominance, and that the towering tower was utilized for worship. Mwari, the greatest god of the Shona faith, was most likely worshiped by the people of Great Zimbabwe.

Disclaimer: This article is gotten from other sources identified below