The Life of Usman Dan Fodio, an Islamic Scholar and Founder of Sokoto Caliphate 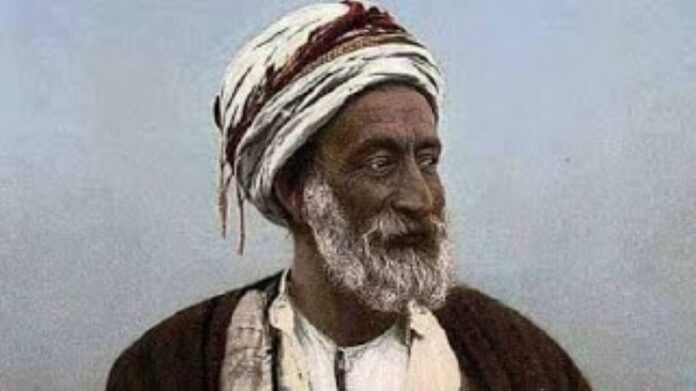 Usman dan Fodio was born in the village of Maratta, in the Hausa-speaking city of Gobir, in what is now northern Nigeria, on December 15, 1754.

In Agadez (in what is now Niger Republic), he studied law, theology, and philosophy under Islamic scholar Jibril Ibn Umar. Because of his theological understanding and authority, he was later referred to as Sheikh Usman.

Usman dan Fodio was a religious scholar who became the leader of a revolution, criticizing the elites and changing the political structure in modern-day northern Nigeria.

His father, Muhammad Fodiye was a scholar from the Toronkawa clan, who had relocated from Futa-Toro in Senegal around the 15th century.

At a very young age, Usman traveled with his family to Degel where he studied the Quran with his father.

Following that, he moved on to other scholar relatives, traveling from teacher to teacher in the customary manner and reading extensively in Islamic studies.

In 1774, Dan Fodio became an itinerant Muslim preacher, traveling through rural areas. He was a pioneer in the spread of Islam throughout the Hausa countryside, broadening the popular base for religious instruction and bringing literacy to several tiny settlements.

He wrote mystic poems and stories, which helped him gain fame as a teacher and preacher.

After finishing his studies, he returned to Gobir and began preaching Islam to the locals, who at the time practiced paganism and Islam.

Usman dan Fodio’s popularity increased in Gobir to the point where the then-King of Gobir, Rimfa, saw him as a threat and attempted to assassinate him. Usman escaped and began preaching, teaching, and writing in remote villages.

He established the Sokoto Caliphate in 1803, and his adherents swore loyalty to him as the Commander of the Faithful (Amr al-Muminn).

Usman declared war against the Hausa Kings, and they were defeated. The caliphate captured Burkina Faso, Cameroon, Southern Niger, and much of Northern Nigeria under Usman’s leadership.

While forging relationships with religious reformists and jihad leaders across Africa, a Fodio soon handed over actual leadership of the Sokoto state to his son, Muhammed Bello.

He promoted literacy and education for both men and women, and some of his daughters went on to become professors and authors.

His works and sayings are still widely quoted today, and he is lovingly known as Shehu in Nigeria.

Some followers regard ɗan Fodio to have been a mujaddid, a divinely sent “reformer of Islam”. Shehu a Fodio’s insurrection was an important occurrence in the 17th, 18th, and 19th centuries movement known as the Fula jihads.

It came after the successful jihads in Futa Bundu, Futa Tooro, and Fouta Djallon between 1650 and 1750, which resulted in the establishment of those three Islamic republics.

Later West African jihads were inspired by the Shehu, notably those of Seku Amadu, founder of the Massina Empire, Omar Saidou Tall, founder of the Toucouleur Empire, who married one of a Fodio’s granddaughters, and Modibo Adama, founder of the Adamawa Emirate.

Sheikh Usman and hundreds of his disciples went to Gudu in 1803, where he continued to spread Islam.

While in Gudu, Usman dan Fodio started a holy war (jihad) against King Yunfa of Gobir (Rimfa’s son and successor) and his people, believing that their way of life contradicted Islamic teaching.

His younger brother, Abdullahi, and his son Muhammad Bello, both outstanding teachers and authors were one of his earliest pupils.

During the 1790s, when Usman appears to have lived constantly in Degel, a religious war formed between his sizable population and the ruling house of Gobir.

Around 1797-98, Sultan Nafata, who was aware that Usman had allowed his community to be armed and whom no doubt feared that it was acquiring the characteristics of a state within a state, reversed the liberal policy he had adopted toward him ten years earlier and issued his historic proclamation forbidding preaching by anyone.

After the rulers of his home city of Gobir sought to murder him, dan Fodio led hundreds of his followers into exile in the countryside in 1802.

There, he developed his reformist ideals and organized, led, and taught a group to lead a jihad or holy war against the Hausa rulers.

In 1804, Gobir’s military commander, Yunfa dan Nafata, dispatched his troops to confront Usman’s village, which now included Fulani pastoralists with their own grievances against Hausa rulers over a cow levy.

Usman Dan Fodio used this incident to call for jihad against Gobir’s rulers. He and his soldiers had captured Gobir, Kano, and other Hausa city-states by 1808.

In 1811, he retired from battle and returned to teaching and writing, but his forces continued to conquer until 1815.

Usman Dan Fodio’s religious empire comprised much of what is now northern Nigeria, northern Cameroon, and parts of Niger by the time those troops finished their conquests.

For the first time in history, all Hausa city-states were united under a single monarch. Dan Fodio built a new capital in Sokoto, and the theocratic empire became known as the Sokoto Caliphate (Sokoto Empire).

Usman dan Fodio’s jihad sparked a succession of holy battles across Western Sudan, establishing Islam as the dominant faith among the populace from Senegal to Chad.

His movement sparked a literary and creative explosion in Gobir, Kano, Katsina, and other Hausa cities.

The number of extant Arabic texts of the Sokoto Caliphate greatly outnumbers the total literary output of central and western Sudan from 1000 AD, when Islam was first established in West Africa, to 1802.

Arabic was now widely utilized throughout the region for diplomacy and correspondence. The holy war statement circulated throughout Hausa land, and many individuals volunteered to join his army.

This religious movement brought the Hausa kingdoms under Islamic law and resulted in the foundation of the Sokoto Caliphate in 1812, which was made up of emirates and sub-emirates, many of which were constructed on the sites of earlier Hausa states.

During the nineteenth century, the Sokoto Caliphate became the region’s most powerful economic and political organization, and it made a significant contribution to the Islamization of Northern Nigeria.

At the Battle of Tsuntua in December 1804, the Shaykh’s soldiers suffered a major loss and were claimed to have lost 2,000 men, 200 of whom learned the Quran by heart.

However, following a successful battle against Kebbi in the spring of 1805, they established a permanent headquarters at Gwandu in the west.

Although the jihad was successful, Usman considered that the initial goals of the reforming movement had been completely forgotten.

This, no doubt, fostered his seclusion into private life. In 1809-10, Bello made Sokoto his headquarters and built a residence for his father nearby at Sifawa, where he lived in his normal humble style, surrounded by 300 students.

The caliphate’s administration was reformed in 1812, with the Shaykh’s two main viziers, Abdullahi and Bello, gaining charge for the western and eastern districts, respectively. The Shaykh, despite remaining ruler, was thus free to return to his principal aspirations, teaching, and writing.

His Islamic religious kingdom encompassed the majority of what is now northern Nigeria, sections of Niger, and northern Cameroon. At the time, the holy war spurred a series of holy wars across West Africa, and Islam became the dominant faith among the people of West Africa.

With an estimated population of over 20 million people in 1837, the Sokoto Caliphate had become the most populous empire in West Africa.

Usman dan Fodio divided his conquests between his brother, Abdullahi, who governed the western half of the kingdom, and his son, Muhammad Bello, who ruled the eastern half, including the Hausa city-states.

By the end of Bello’s reign in 1837, the Sokoto Caliphate had grown to become the most populous kingdom in West Africa, with an estimated 20 million inhabitants.

Dan Fodio, who began his life as an idealistic scholar and theologian who initially refused the sword, rose to become the commanding and aggressive leader of a formidable military empire.

In the early nineteenth century, Usman was the most prominent reforming leader in the western Sudan region.

His significance stems partially from the new drive he provided to Islam throughout the region as a mujaddid, or renewer of faith, and partly from his work as a teacher and thinker.

In his later roles, he was the focal point of a student network and the creator of a significant corpus of writings in Arabic and Fulani that covered the majority of Islamic studies and enjoyed — and continues to enjoy — widespread circulation and influence.

Finally, Usman’s significance stems from his work as the builder of an Islamic community, the Sokoto caliphate, which united the Hausa states and some neighboring lands under a single central administration for the first time.

Around 1815, he relocated to Sokoto, where Bello built him a house in the western suburbs and where he died in 1817, at the age of 62.