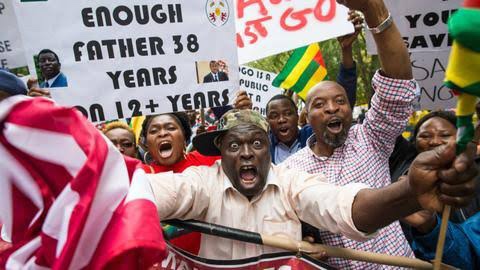 Protesters waved Malian flags and shouted anti-UN slogans, while some carried Russian flags as they marched through the streets of the capital in protest against the presence of the UN peacekeeping mission, MINUSMA.

The Malian army government had an icy relationship with the UN mission, also known as MINUSMA, which culminated in the arrest of Ivorian soldiers in July after being branded as mercenaries.

The protest also comes amid allegations of sexual abuse by UN Staff in South Sudan Camps.

“MINUSMA did nothing here. We want them to go. We are here to demonstrate to the world that we do not want MINUSMA anymore. We are not concerned with MINUSMA. We cherish our nation. We want our army, under the command of Colonel Assimi Goita,” declared protester Lassina Doumbia.

“They are free to return to and remain in their houses. They are no longer required to assist us. For us, Assimi Goita is sufficient. Mali’s youth is sufficient for us, another protester, Samba M. Wangara said.

In July, Malian authorities suspended rotations of peacekeeping forces before reversing the decision a month later. The 12,000-strong force has been in the West African country since 2013.