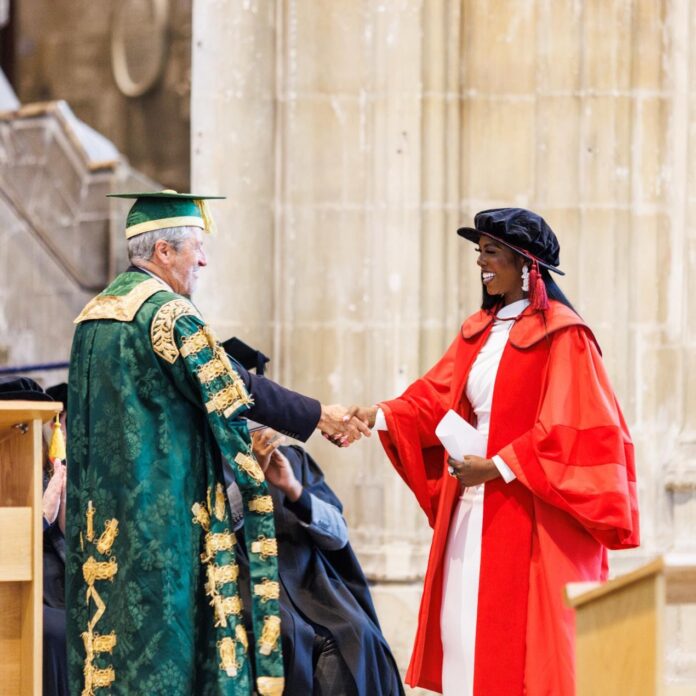 Nigerian singer and multi-award winner Tiwatope Savage, commonly known as Tiwa Savage, has received an honorary doctorate from her alma mater, the University of Kent, UK.

The University of Kent used the popular social media platform Twitter to share a photo of the Afro-beat sensation, receiving the certificate at Canterbury Cathedral on Friday.

The photo was captioned: “Congratulations Dr. @TiwaSavage! We are very proud to have conferred an honorary doctorate on the Queen of Afro beats at Canterbury Cathedral this morning.”

In her message to the class of 2022, the singer said, “I’m super proud and I want you to go out there and have fun and rock. Be the best you can be because you truly deserve it.”

In a video shared on her Instagram page by colleague Bankulli Osha on Friday, Tiwa was seen addressing the audience in academic garb.

She said she faced severe bullying, among other things, and was suspended from school several times.

“Actually, I failed at many things,” she said. “I was bullied a lot at school when I moved to the UK, I ran away from home a few times, I got suspended from school a few times.”

Referring indirectly to the sex tape scandal, the singer said: “I’ve been mocked a few times around the world, I won’t say what it is, but it rhymes with ‘Cape’. The irony.”

“During my graduation, I failed Principles of Finance at this very university.”

She noted that despite struggles, she managed to become a “leading figure” in Afro beats.

The mother of one also explained that while some call her the Queen, from now on, she will be known as “Dr. Savage” should be called.

Savage previously obtained an accounting degree from Kent. She is also a graduate of Berkley College of Music in Boston, Massachusetts.