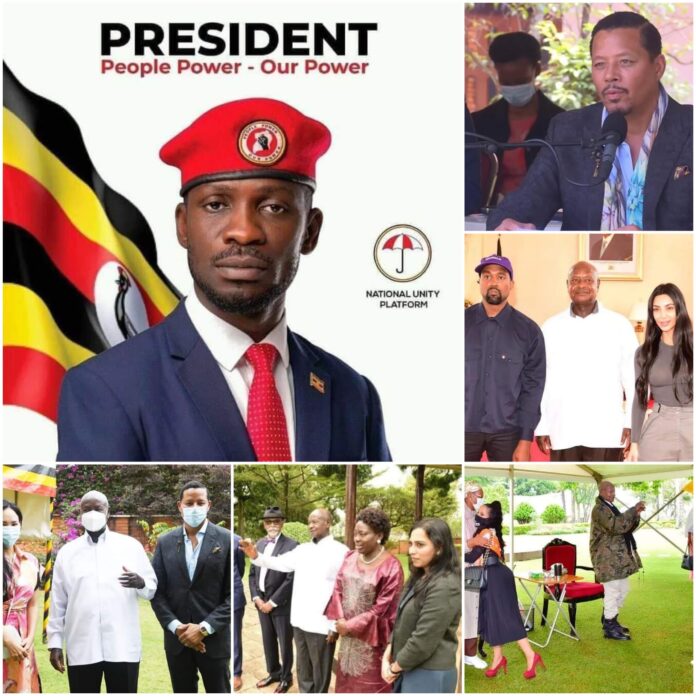 In a Facebook post titled “The hypocrisy of Terrence Howard in Uganda,” Bobi wine revealed his displeasure with some statements made by Terrence Howard, who had earlier visited President Museveni where he highlighted several plans to help Uganda.

In the now controversial Facebook post, the Ugandan politician called Howard a character no different from the “house Negro,” as he called his visit to Uganda “hypocrisy.”

The musician turned politician claimed he had a hard time watching the video of Howard, a video which he called “sickening.” Kyagulanyi seemed unmoved by the highlighted projects Howard intended to implement in Uganda.

In response to the “new flight technology and hydrogen technology,” among other projects highlighted by Howard, Wine revealed he is unconvinced that Howard could implement said projects in Uganda, as the United States would guarantee better investors, yet Howard chose Uganda.

The singer claimed that Uganda and its people are not new to such promises from “shrewd peddlers of false hope,” as many of them visit Uganda often.

“We saw musician Akon who came peddling ‘smart cities’ to be built in Uganda, when he has not built any in his homeland Senegal. All he needed was land. This means evicting poor Ugandans from their land to create a mile of land that Akon asked for,” Kyaguqlanyi said.

Kyaguqlanyi added; “We saw ‘Prof.’ Safaraz Niazi who came in early 2020 peddling a Covid-19 “vaccine” for use in Uganda at a time when even the richest and most medically advanced countries on earth were still scratching their heads to find one. All he needed was money.”

Kyaguqlanyi who had earlier run for president but was defeated by Museveni stated that the intentions of the American actor, whether legitimate or not, are “evidently just part of yet another grand scheme that dictator Museveni and the rest of his criminal enterprise have designed to once again take a huge bite out of Uganda’s resources.”

Kyaguqlanyi controversially referred to Howard as a hired gun. “Terrence Howard is simply a hired gun participating in a game of con-artistry — and he knows it! If he was doing it in USA where strict and credible accountability is required for expending public resources, Mr. Howard would probably be a candidate for criminal prosecution — and he knows it!(…),” he said.

“As I write this, in Karamoja region, Ugandans are dying of hunger while Gen. Museveni — a world renown tyrant and mass murderer — spends a billion shillings every day at home and his impulsive son spends some more on lavish birthday parties across the country!” he added.

Bobi Wine as he is often called claimed that Howard isn’t concerned about the oppression and corruption by the government of Uganda, especially as its citizens are his fellow black men.

“Mr. Howard is not concerned about this oppression of his fellow black people in Uganda, so long as he gets his share of the dictator’s loot! How different is he, then, from the House Negro?” Kyaguqlanyi stated.

“If Terrence Howard really cares about Uganda, the last thing he should do is dine with a tyrant who has looted the country, undermined its democracy, terrorized its people and stagnated its development,” Kyaguqlanyi added as he closed his controversial post.