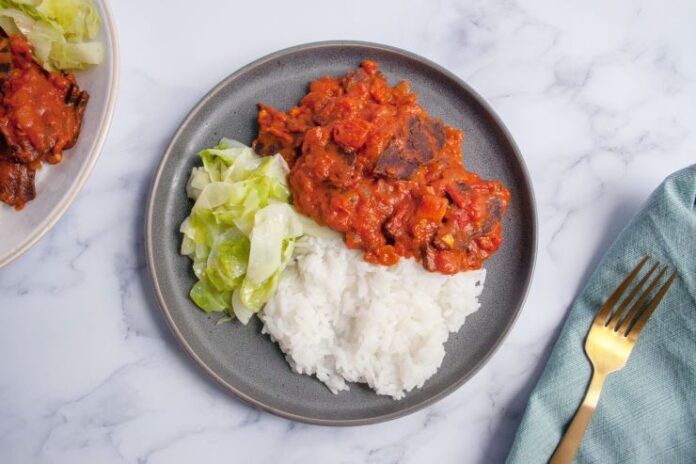 All around Africa, several types of soups, together with meat, fish, and vegetables, are very popular.

In contrast to other cultures, African stews are typically served alongside starchy side dishes. These are particularly common in West African nations.

Whenever you are in a mood to prepare some tasty African stew, here are 10 mouth watering African stew recipes to try out.

Tajine, usually spelled tagine, is a typical African stew that is well eaten in Morocco.

It is the name for the cooking pot used to prepare the hearty Moroccan stews. It is a circular, shallow, clay or ceramic casserole with a tall, angular, conical cover when referring to the cooking utensil.

Since the lid and base fit together, there is no flavor or moisture loss because the steam condenses on the inside of the lid and falls back into the stew. The pots produce buttery, soft vegetables and meat that comes off the bone whether used for slow cooking over embers or on a stove.

There are two types of tajines: glazed and unglazed. Glazed tajines are better for infrequent cooks because they are earthier and darken over time.

The dish is particularly well-liked at parties and such gatherings. The recipe is thought to have been created by shepherds who, on chilly nights, required a hearty dinner when they got home.

The name of the dish, which alludes to the main component of chakhchoukha, can be loosely translated as torn flatbread.

A South African cuisine called potjiekos is created by layering sauce, carbohydrates (such pasta, potatoes, or rice), and meat in a pot.

Since potjiekos is cooked slowly to allow the steam to accumulate, the dish is never stirred while it is cooking. Due to the lengthy cooking time—between three and six hours—making potjiekos is traditionally a group activity.

Small pots are used to prepare it, therefore the name. Although the meal has been around since the 1800s, many people still eat it now.

Traditional dishes from Sudan, Egypt, and Tunisia all share the same name: kamounia. Common ingredients for this hearty stew include meat, liver, and cumin.

There are variations, so occasionally lamb is used in place of the beef, and other spices are also used depending on the region.

Parsley, olive oil, and garlic are some popular additions to stews. When finished, rice is frequently served with or on top of kamounia.

As the name implies, Liberian cabbage stew is a typical African stew from that country.

The stew is cooked until it thickens and the components are soft after the addition of the last few ingredients. To avoid the components clinging to the bottom of the pot, it is advised to keep a close eye on the stew.

An Ethiopian delicacy called kik alicha is created with a purée of yellow split peas. The meal can also be spiced with garlic, turmeric, or ginger. It has a mild and flavorful flavor. For a balanced dinner, kik alicha is best served with rice or injera bread on the side.

An Algerian meal known as lham (lit. meat) lahlou (lit. sweet) consists of lamb chunks simmered in a sweet syrup with fruit and various spices including cinnamon and star anise.

Fruits like prunes, quince, apples, pears, apricots, and raisins are frequently used in the meal.

Usually, the dish is saved for Ramadan, when it is eaten to break the fast. Lham lahlou is great for keeping the energy levels up for midnight prayers because it is packed with sugar.

Doro wat is a festive variety of chicken-based wat stew that is typically purchased from outdoor markets. To get rid of microorganisms, the meat is first soaked in water, salt, and lemon juice. It is then chopped into eight to twelve pieces.

About five minutes before the stew is finished, peeled hard-boiled eggs are put to it so they may soak up all the savory flavors and the delicate red color.

Doro wat is a must-have dish at every celebration, including Christmas and Easter, thanks to its delicate beef, spiciness in the eggs, and rich, savory sauce.

Most Ethiopians chose Doro wat as their favored and finally permitted meat-based cuisine on Christmas after fasting for 43 days without meat.

A quarter- or half-loaf of bread is hollowed out and filled with a curry made with kidney beans or meats like mutton, chicken, or lamb for the South African delicacy known as “bunny chow.”

It is typically eaten without using any cutlery. Bunny chow is thought to have its roots in the Indian immigrants who came to South Africa in the late 19th century and originated in the city of Durban.

While the onions, tomatoes, and tomato paste are mixed and fried with the catfish, the fish is rinsed in hot water with lime.

After adding salt and pepper to the mixture and adding water, the dish and vegetables are stirred into the saucepan. After the stew has simmered for a bit, the heat is reduced to a low setting, and salt and pepper are added once more.