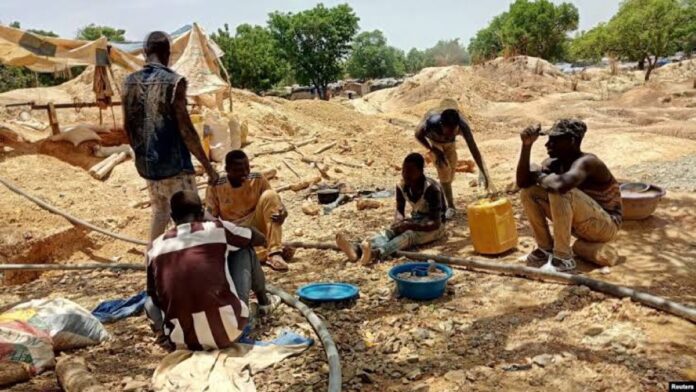 The incident happened after 12 miners were arrested for taking part in ransacking the gold mine.

According to officials, miners became enraged after the arrest of their comrades and immediately reacted to the presence of local police among them.

The spokesperson, Lionel Bilgo, after a meeting with the council of ministers, directed the attention of the local press to the incident.

Bilgo said that “Yesterday, Tuesday (May 24), there was a movement of gold miners demanding the release of their comrades who had been arrested following the demonstration that caused the destruction of equipment and injuries at the Houndé mine.”

He went on to say that one of the deaths was caused by a stampede, while the other was caused by gunshots. He explained that to uncover the origin of the gunshots heard at the scene and to also determine who was responsible, an inquiry is ongoing.

On the 17th of May, a group of gold miners who opposed the deportation of local miners raided the Houndé gold mine, injuring seven individuals and setting fire to dozens of vehicles.

Bilgo explained that the demonstrations had caused significant damage to the mine and disrupted its activities. This unfortunate incident led to the arrest of twelve people which further caused more active clashes between miners and local authorities. He urged the miners to remain calm and announced the formation of a crisis committee to “find a solution” to the sensitive issue.

Recall that last month, flooding trapped eight miners at a Canadian-owned mine in Perkoa, roughly 120 kilometers west of Ouagadougou, the country’s capital.

The floods occurred after strong rainfall on April 16. Rescuers have been working nonstop since then to pump 165 million liters of water from the inundated chambers.

The rescue crew required 31 days to reach the first rescue chamber, which was located at around 560 meters and where the missing miners may have sought sanctuary from the flooding. However, none of the men – six Burkinabès, a Zambian, and a Tanzanian – were present when the chamber was opened last week.

According to reports, at the bottom of the 710 m mine, there is a second chamber, a chamber that perhaps housed the miners for days. In response to the incident, the administration issued a statement expressing its sympathies to the victims’ families.

Officials have claimed that families are being alerted when each worker is retrieved and recognized. Trevali and Byrnecut, the mining contractor for the Perkoa Mine, are in frequent communication with the families of all eight miners and have promised to continue to offer support.

Rescuers were 610 meters deep in the mine on May 20th, and 14 million gallons (63 million liters) of water had been retrieved. However, a total of 100 million liters remain to be pumped. The hunt for the last four miners continues, but it’s difficult to say when they will be discovered.

Read also; 6 Ways to Make Money As a Remote Software Developer in Africa