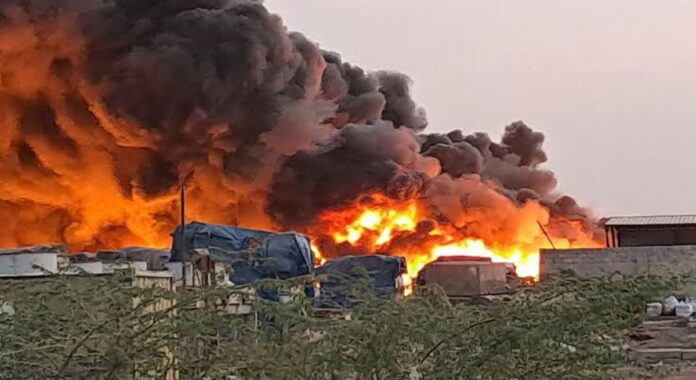 According to official reports, the fire on the docks of the famous Sudanese port of Suakin, a commercial crossroads of East Africa on the Red Sea, has been brought under control.

The port’s director spoke about the incident that happened on Wednesday, stating that an inquiry is still on to ascertain the causes and losses in terms of property damage.

Reports claim that the fire was brought under control by teams of first responders whose actions saved several properties and people from danger.

As noted by Taha Ahmed Moukhtar, the director of this famed location, locals have the actions of civil defense forces to thank for the reduction in the potential damage that could have been caused by the fire. “Thanks to the intervention of the civil defense forces and port employees, the fire is now under control,” Moukhtar said.

The port, which has been an essential part of Sudanese history, has been around and functioning for centuries, with historical records dating back well before modern Sudan.

However, beyond its historical significance, the port has been noted by several officials to have served the nation quite well in terms of economic advantage. It is, therefore, for this reason that a fire outbreak in such a sensitive location has been brought to the necessary authorities’ attention, and an investigation has been opened to determine the causes of the fire. According to reports, the fire completely covered the area of the port, located nearly 800 km northeast of Khartoum, with smoke.

To facilitate the investigation, a commission has been formed to estimate the damages suffered by Sudan’s second largest port. Unfortunately, the losses may be considerably much, as an AFP photographer spotted towering walls of smoke on the docks where stored goods appeared to be at the mercy of the flames.

Imports and exports from Sudan, Chad, Ethiopia, and the Central African Republic, as well as oil from South Sudan, pass through Sudan’s Red Sea ports, further establishing just how significant they are to Sudan and its neighboring countries.

Sudanese dictator Omar al-Bashir, who has since resigned, signed a 99-year lease with Turkish President Recep Tayyip Erdogan in late 2017 for Ankara to rehabilitate Suakin, which is noted for its opulent coral limestone palaces built by Pharaoh Ramses II.

While the historic buildings are being renovated, work on the port’s infrastructure has yet to begin.

Sudan had already lost 40% of its revenue in October when the international community shut off funding in reprisal for General Abdel Fattah al-coup Burhane’s d’état.

Recall that a local tribal group‘s blockade of Sudan’s main Red Sea port and threats of future interruptions earlier hampered efforts to move the country out of its economic crisis back in 2021. This was significantly difficult that considerations were made to divert commercial flows to another regional route.