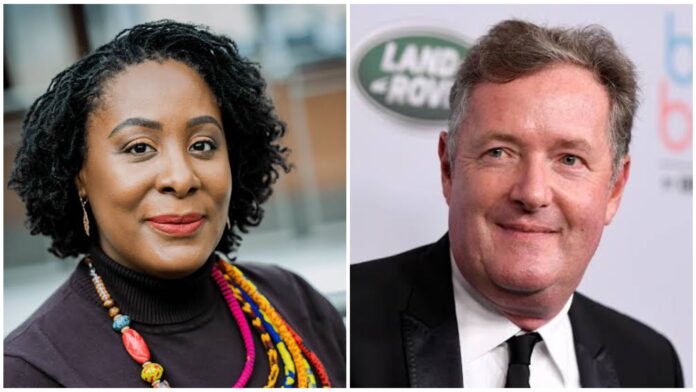 Morgan and Uju were embroiled in sharp criticism of each other on Twitter after the former wished the late Queen Elizabeth II “excruciating pain” when she died.

In a tweet before the formal announcement of the queen’s death, Professor Uju wrote: “I have heard that the supreme monarch of a genocidal, thieving, and raping empire is finally dying. May her pain be excruciating.”

“If anyone expects me to express anything other than contempt for the monarch who oversaw a government that supported the genocide that massacred and expelled half my family and whose aftermath those alive today are still trying to overcome, you can imagine continuing to want a star,” she wrote after the Queen’s death.

Responding to Uju’s tweet, Morgan invited her to an interview on his show, writing, “I would definitely like to interview her. I want you to try and tell me to my face that you expected the queen to die in ‘excruciating pain’. You?”

“No piers. You want to interview me because your career has died of excruciating pain and you need the ratings. But I won’t let you take away my influence. Like I said, I never feed my enemy’s mouth,” she said scornfully.

“Piers Morgan calls me ‘vile, disgusting idiot’ while his producer calls me in for an interview. Tufiakwa,” she added.

An angry Morgan responded to her rejection with another harsh tweet. “As I thought, you don’t have the heart to repeat your disgusting insults about the queen to anyone who holds you responsible. You’re not just a disgrace, you’re a cowardly disgrace,” he said.

Uju Anya’s tweet drew a mixed reaction from around the world, including the world’s second richest man, Jeff Bezos.

As for her action affecting her work, she said, “From what I’ve been told, there is no plan to sanction or fire me and my work is not at risk. My university leadership has made it very clear that they do not approve of my speech; however, they support strongly my freedom of expression in my personal social networks”.

While Professor Uju portrays herself as a feminist and advocates for social justice, particularly for black people, Morgan is a critic who is quick to make nasty remarks against public figures in his uncensored broadcast on Sky News.