White Student Urinates on Belongings of Black Student in South-Africa 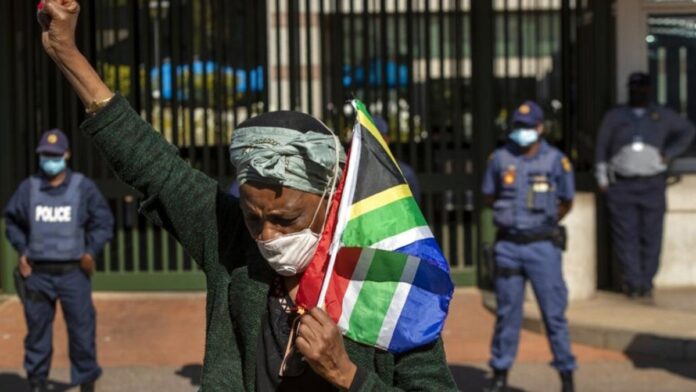 There have been several reactions to a supposedly racially motivated action against black students in South Africa.

The action was detailed in a video now trending online with a white student urinating on the computer and books of a black student at the Stellenbosch University in the Western Cape.

The incident which was captured on video by a witness; happened on Sunday, May 15th, 2022 at around 04:00 at Huise Maria’s residence. According to witnesses, the white student arrived at the scene while the black first-year student was asleep.

The video captures the sound of a standing student asking what he was doing but the white student replied; “I’m waiting for someone”, without interrupting what he is doing.

Of course, the university has expressed its condemnation of such actions. In a statement released by the University on Monday, it was stated that it “strongly condemns this destructive, hurtful and racist incident.” an immediate suspension of said white student described short brown hair was announced.

“We are appalled by this type of behavior,” said vice president Wim de Villiers. He further claimed that “No student has the right to violate the dignity or rights of another student in this way.”

The student union community of the institution revealed a clear perspective on the issue. In a statement released as the video went viral; it was revealed that the victim was asleep when he heard a noise in his room.

A Racially Motivated Crime on Minorities?

“When he awoke, the racist white boy was urinating on his desk, books, and laptop;” according to the Congress of South African Students, and when questioned, “the racist response was that this is what we do to black boys.”

The university’s student representatives said that the episode was typical of the “evil inflicted on minorities; notably black students here” by the university’s white majority in a black-majority country.

Besides, a protest broke out among students on campus, with several students of all races joining forces to speak against the action.

According to a local media on Tuesday; the family of a 20-year-old black student who was the victim of a suspected racial incident at the University has announced that they will file a criminal complaint against the alleged offender.