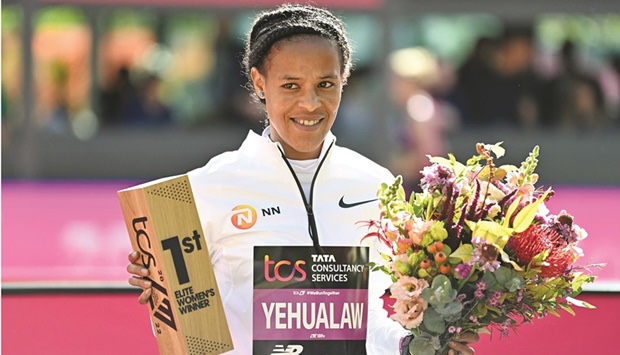 A new star was born on the streets of London when 23-year-old Yalemzerf Yehualaw became the youngest woman to win the London Marathon.

What made Yehualaw’s victory even more impressive was that she had to endure a fall that had her face hitting a policeman’s speed bump with six miles to go. The fall had the Ethiopian runner initially slowing down also causing significant pain in her hip, leaving her at least 25 yards behind the leading pack.

Yehualaw however, picked herself up, returned to the competition, and quickly beat her rivals with an interesting win in 2 hours 17 minutes 26 seconds.

It was the third fastest time in women’s racing history, behind only Paula Radcliffe and Mary Keitany.

A leading group of six was gradually reduced, leaving the race between Yehualaw and last year’s winner Joyciline Jepkosgei with two miles to go. But then the Ethiopian hit the afterburners. She ran that 24 mile in an exceptional 4 minutes and 43 seconds to take the win in 41 seconds.

Yehualaw, who competes in the same NN group as men’s world champion Eliud Kipchoge, now plans to return to London in April to defend her title. Although she admits that she in fact has bigger goals in mind.

“It’s my first time in London so I’m really happy to win,” said Yehualaw, who runs 180-195km a week in training. “People screamed a lot and it inspired me. But the longest plan I have is that next time I would like to break the world record.”

Britain’s top finalist Rose Harvey said she was delighted to have done so well after starting to train in earnest in lockdown. “I was let go,” said the 30-year-old after finishing 10th in 2:27:59.

Meanwhile, in the men’s race, Amos Kipruto, who was often the maid of honor but never the bride in the main races, won.

The 30-year-old Kenyan won the bronze medal at the 2019 World Championships in Athletics and placed second in the 2022 Tokyo Marathon behind Kipchoge, but looked strong the entire time.