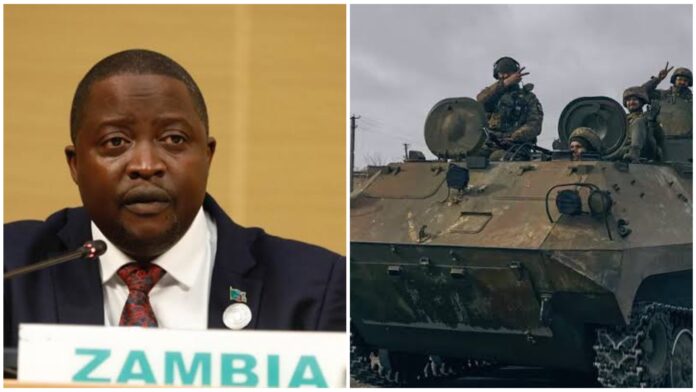 The Zambian government announced on Monday that a Zambian student serving a nine-year and six-month sentence in a Russian prison was killed while fighting alongside Russian forces in Ukraine.

Zambian Foreign Minister Stanley Kakubo said Russian authorities informed the Zambian government of the death of 23-year-old Limkhan Nyerda, who was a government-sponsored student, before he was convicted of unspecified crimes in April 2020.

Kakubo said the Zambian government is seeking answers from Russia on how Nyirenda entered the battlefield in Russia’s war against Ukraine.

“In light of this very sad development, the Zambian government has asked the Russian authorities for urgent information on the circumstances in which a Zambian citizen serving a prison sentence in Moscow could have been recruited to fight in Ukraine and lost his life as a result,” Kakubo said on Monday.

He said the Zambian embassy in the Russian capital Moscow confirmed that Nyrinda died on 22 September and that her remains were transferred to the Russian border city of Rostov before being returned to Zambia.

Before being sentenced to prison, Nyrinda studied nuclear engineering at the Moscow Institute of Technical Physics. According to the Zambian government, he was serving his time in a medium-security prison in Tyr, outside Moscow.