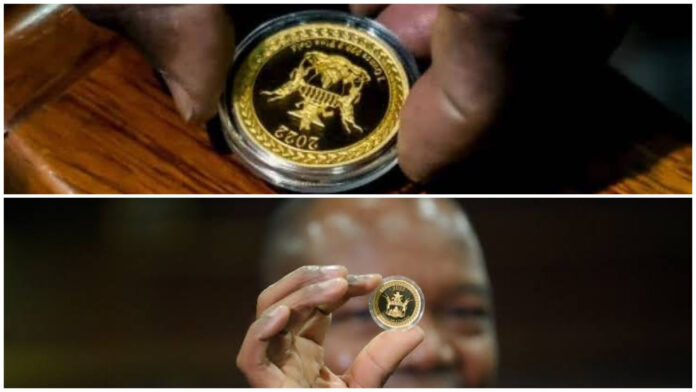 With Zimbabwe’s inflation soaring and the country’s currency in freefall as people abandon it in favor of the US dollar, the government of President Emmerson Mnangagwa is fighting back with a new strategy, introducing gold coins to the Zimbabwean market.

Starting Monday, Zimbabwe will be selling 22,000 gold coins with an image of Victoria Falls, its world-famous natural wonder.

The central bank said in its July 4 announcement that each will have a serial number, will be accompanied by a certificate, and will be sold at a price “depending on current global gold prices and prevailing production costs”.

According to the bank, the coins would be transferable in Zimbabwe and abroad and could be converted into cash. The aim is to reduce the amount of Zimbabwe dollars in circulation and eventually restore the value of that currency.

With strong memories of that catastrophic time and many retailers rejecting the Zimbabwean currency, Zimbabweans today prefer to scour the illicit market for scarce US dollars to keep at home for savings or everyday transactions.

The central bank paid 2,000 coins to commercial banks on Monday. The first batch of coins was minted outside the country but will be produced locally, according to Reserve Bank of Zimbabwe Governor John Mangudya.

Zimbabwean economist Prosper Chitambara said that “the government is trying to contain the very high demand for the US dollar as this high demand is not being matched by supply”.

Moderation is also expected in the depreciation of the dollar, the local currency, which should have some stabilizing effect on the pricing of goods,” he added.

Any individual or company can purchase the gold coins from authorized agents such as banks in local or foreign currency, and buyers can store the coins at a bank or take them home, according to an announcement by the country’s central bank.

Foreigners can only buy currency in foreign currency, the announcement followed.

The coins, named Mosi-oa-Tunya, which refers to Victoria Falls in the local language of Tonga, “will have liquid asset status, meaning they can be easily converted into cash and are tradable locally and internationally, like a currency can be used for transactional purposes,” the central bank added.

People who own the coins can only exchange them for cash after 180 days from the date of purchase, the bank said.

The coins, which weigh one troy ounce each and have a purity of 22 carats, can also be used as collateral for loans and lines of credit, the central bank said.

The price of coins is determined by the international market price of one ounce of gold plus 5% for the cost of producing the coin. At the time of launch on Monday, the Mosi oa Tunya coin was priced at $1,824.