Zimbabwe Relocates 2,500 Wild Animals To Save Them From Drought 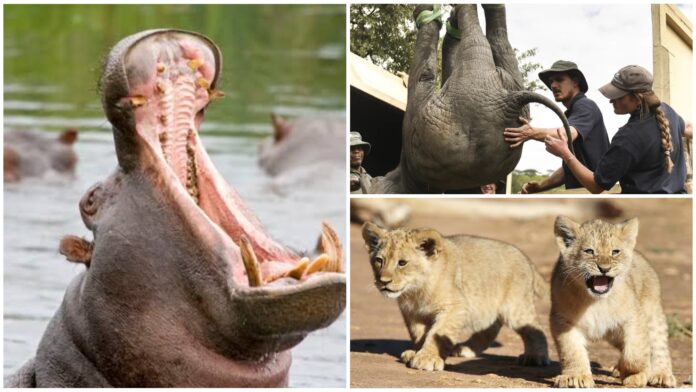 Zimbabwe has begun the process of moving at least 2,500 wildlife creatures from the Southern region of the country to the North. The process is said to have been put in place to ensure the survival of the animals as drought becomes a great threat due to climate change.

About 400 elephants, 2,000 impalas, 70 giraffes, 50 buffaloes, 50 wildebeests, 50 zebras, 50 elands, 10 lions and a pride of 10 wild dogs are among the animals brought by the Save Valley Conservancy of Zimbabwe to three wildlife sanctuaries in north – Sapi , Matusadonha and Chizarira – in one of the largest live animal capture and translocation exercises in Southern Africa.

The “Zambezi Rewild Project”, as the operation is called, brings the animals to an area of the Zambezi Valley to replenish wildlife populations there.

It is the first time in 60 years that Zimbabwe has carried out a massive movement of wild animals into the country. Between 1958 and 1964, when the country was ruled by the white minority, more than 5,000 animals were relocated in the so-called “Operation Noah”.

This operation saved the fauna from the rising waters caused by the construction of a huge dam on the Zambezi River that created one of the largest artificial lakes in the world, Lake Kariba.

This time, it was the lack of water that made it necessary to relocate the wildlife as their habitat was dried up by the prolonged drought, said Tinashe Farawo, spokeswoman for the Zimbabwe National Parks and Wildlife Management Authority.

“We are doing this to relieve the pressure. For years we have been fighting poaching and by the time we have won this war, climate change has become the number one threat to our wildlife,” Farawo told AFP.

Although there have since been considerations and opinions as far as intentionally reducing the population of wildlife animals. However, conservation groups have protested this idea calling it a “cruel action,” the last of which was done in Zimbabwe in 1987.

The impacts of climate change on wildlife are not limited to Zimbabwe. Across Africa, national parks, which are home to countless wildlife such as lions, elephants, and buffalo, are increasingly at risk due to below-average rainfall and new infrastructure projects.

According to some officials, the drought has since become an even greater threat to the population of wild creatures than poaching ever was. Officials believe that the survival of these animals such as rhinos, giraffes, and antelopes is greatly threatened as food availability becomes a problem.

For example, a recent study in Kruger National Park in South Africa linked extreme weather events to the loss of plants and animals that could not withstand harsh conditions and lack of water due to prolonged periods of drought and high temperatures.

The mass movement is supported by the Great Plains Foundation, a non-profit organization that, according to its website, works to “conserve and improve natural habitats in Africa through innovative conservation initiatives.”

According to the website, the organization is working with Zimbabwe’s National Parks and Wildlife Management Authority, local experts, the Center for Environmental Forensic Science at the University of Washington-Seattle and the Department of Zoology at the University of Oxford.

One of the new relocated animal sanctuaries in Zimbabwe is the Sapi Game Reserve. The 280,000-hectare private concession lies east of Mana Pools National Park, a UNESCO World Heritage Site known for its scenic location on the Zambezi River, which forms the border between Zimbabwe and Zambia.