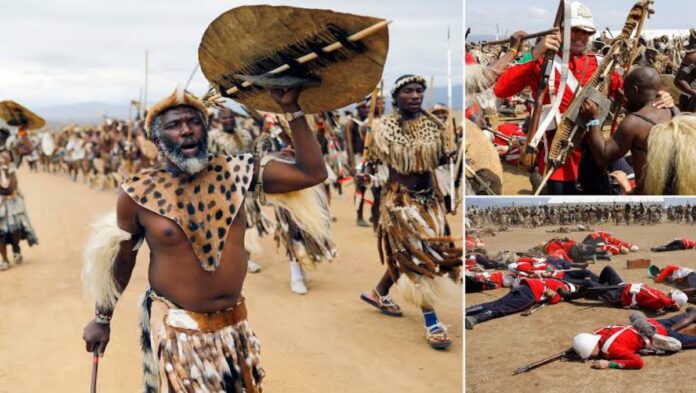 Thousands of Zulu men gathered at the historic site of Isandlwana on Saturday 21 January to commemorate the day in 1879 when the Zulus won a decisive victory over the British.

It is one of the greatest victories in Zulu history and the only battle in which oxhide spears and shields destroyed the British Army’s muskets and cannons.

“Actually, we are here to commemorate the invasion of Zulu warriors, where the Zulus defeated the whites,” said Zulu warrior Mozi Nyandini.

The Zulus were not professional soldiers, but they became very skilled at warfare under Shaka Zulus in the early 19th century.

The ceremony was attended by John Murphy, Major in the Royal Welsh Army.

“It’s important to remember the battle because it’s an important part of our history,” he said. “It is also important for us and the Zulus to commemorate fallen soldiers,” he added.

During the performance, many Zulus sing songs and perform traditional animal skins, bone necklaces and spears.

Gavin Slater, the lead actor in the re-enactment of The Dundee Diehards, said he understood the importance of the event.

“In fact, Isandlwana is one of the most humiliating defeats the British Army has ever suffered,” he said.

Although the defenders had guns, the attackers forced them into a bloody battle and then defeated the colonial soldiers.