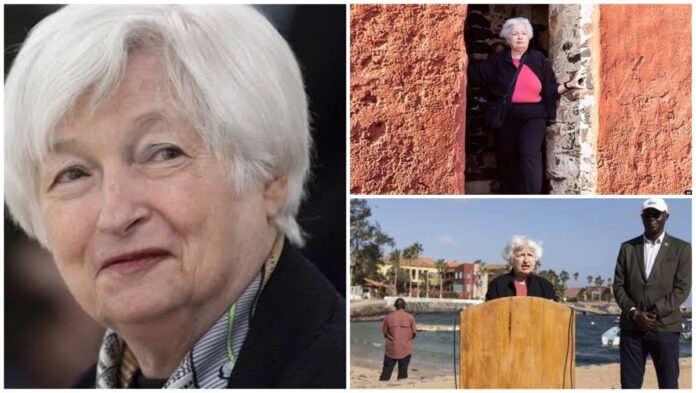 US Treasury Secretary Janet Yellen on Saturday paid a state visit to the salmon-colored house on an island off Senegal, one of the best-known symbols of the horrors of the Atlantic slave trade that held tens of millions of Africans captive for generations.

It is part of a 10-day journey aimed at rebuilding economic ties between the United States and Africa.

The building was known as the “House of Slaves,” from where tens of millions of Africans were shipped across the Atlantic.

“Gorée and the transatlantic slave trade are not only part of African history,” Yellen said, “they are also part of American history.”

“We know that the tragedy didn’t stop with the generation of people displaced from here. Even after the abolition of slavery, black Americans — many of whom persecuted their descendants through ports like these across Africa — have been denied the rights and freedoms promised them by our Constitution,” she said.

In the United States, according to the White House Historical Association, African slaves and their children helped build the country’s most famous institutions, including the White House and the Capitol.

Yellen acknowledged the lingering impact of this brutal past and the survival of many of its victims.

Yellen said; “In the United States, it is remarkable how so many African American men and women have overcome adversity, created better lives for themselves and their descendants, and become central to our economy and democracy by building our cities, supporting our industries, and… bowing the conscience of the United States and the world regarding justice and all this in the face of systematic socio-economic injustice”.

Yellen’s trip to the island was attended by many dignitaries, including former US Presidents Barack Obama and Bill Clinton, and South African President Nelson Mandela.