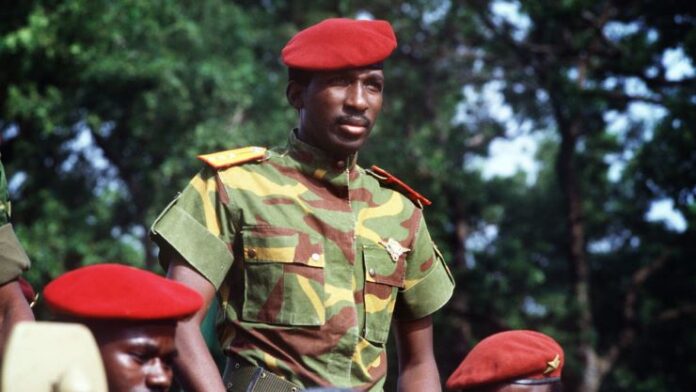 One of Africa’s most renowned leaders, Thomas Sankara, a former president of Burkina Faso, was assassinated in a military takeover on October 15, 1987.

Burkina Faso’s ambitious campaign for democratic, social, and economic change is attributed with having its roots in the charismatic leader known as “Africa’s Che Guevara.”

Thomas Sankara only held power for four years, yet he created a lasting legacy that is honored not just in Africa but also around the world.

At the age of 33, the former military captain who became a pan-Africanist overthrew the government in a popular uprising in 1983.

Sankara’s key goals for the landlocked nation of West Africa were straightforward: get rid of corruption and abolish French rule.

The pan Africanist’s political objective was obvious, but so was his outlook on a number of other issues, like as women’s empowerment, environmental preservation, and health.

Thomas Sankara once quoted, “The enemies of a people are those who hold them in ignorance,” in one of his addresses.

So why does the great Thomas Sankara name still ring in every African’s ears 30 years later?

As soon as he came into office, Thomas Sankara auctioned off the government’s Mercedes fleet and replaced them with the standard Renault 5, which was at the time the least expensive automobile in Burkina Faso.

All government officials and ministers started using the Renault as their official service vehicle. He also slashed the pay of every public employee, including himself, and prohibited the use of government chauffeurs and first-class airfare.

Notably, he reduced his monthly income to $450 while serving as president and kept just a car, four bikes, three guitars, a refrigerator, and a malfunctioning freezer in his possession.

2. Author of the National anthem

Sankara may be the only head of state in history to have penned their nation’s song. The president wrote the anthem and provided its tune as a skilled guitarist.

Foreign aid to his nation was stopped by Sankara because he believed it was a tool used by the developed world to exert control over developing countries.

But there was a strategy behind it. He then proceeded to seize land from the feudal landowners and give it to the peasants directly. The nation’s wheat production increased from 1700 kg per hectare to 3800 kg per hectare in just three years, making it food self-sufficient.

Once in power, the African Che Guevara immunized 2.5 million kids in a couple of weeks against meningitis, yellow fever, and measles.

To stop the Sahel’s increasing desertification, Sankara also planted over 10 million trees. African nations are just now preparing to start an ambitious project called the Great Green Wall that would see the emergence of an 8,000 km natural wonder of the world over the full width of Africa.

To ensure that women’s rights were upheld, severe fines and penalties were implemented. Sankara also promoted and recruited women for the military, gave them time off to have children while in school, placed them to top government positions, and encouraged them to work.

7. No portraits allowed in public spaces or government buildings.

As is customary for African leaders, the former president also objected to having his photo displayed in public spaces and official buildings. He argued that there were millions of Sankaras who desired to have their portraits up on walls but did not do so.

8. He objected to using the air conditioning in his workplace, saying that only a small number of Burkinabes could afford such a luxury.

9. He was an ardent supporter of Africa’s unification. He urged other African presidents to reject accepting foreign help, claiming that doing so would neo-colonize them. He opposed foreign aid, saying that “he who feeds you, controls you.”