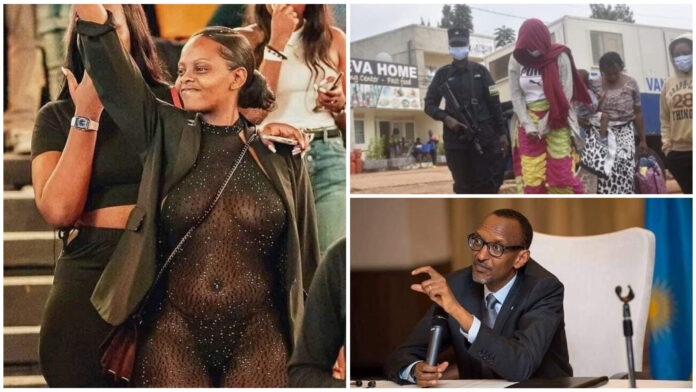 A 24-year-old woman arrested in Rwanda for wearing “revealing” cloths now faces up to two years in prison for “public indecency”, prosecutors said on Thursday.

Liliane Mugabekazi was arrested on August 7 after attending a concert by well-known French musician Tayc, wearing what many have tagged a “shameful” dress.

“She came to the show wearing clothes that revealed her private parts… clothes we call shameful,” prosecutors said, accusing her of a “serious crime.”

“For these serious reasons, we ask the court to detain Mugabekazi for 30 days.”

“She is suspected of committing public indecency,” prosecutor spokesman Faustin Nkusi told AFP, adding that the court would announce on Tuesday whether she would be released on bail.

News of the arrest sparked outrage from some Rwandans, but government officials, including former Attorney General Johnston Busingye, supported the move.

He explained in a tweet that the current situation of our young men and women drinking, taking drugs, and physically being nude in public is repulsive.

Busingye, who is now Rwanda’s ambassador to the UK said that “he supports the effort to resolve this.”

In a television interview last week, police spokesman John Bosco spoke fiercely against what he called “immorality and indecency among young people.”

“This issue is getting worse… A person in just a shirt, without any shorts or pants, is found ” he said.

“These people dress like this and wear clothing that resembles hammocks while they are in public areas.”

When the show’s host asked him if “these people don’t have the right to dress as they like,” he replied, “The first right is to dress well, not immodestly.”

In recent years, many Rwandans have come into conflict with the country’s strict laws against indecency.

In March, police arrested a 20-year-old woman on charges of “public intoxication and indecent exposure” after a video of her lying on the floor in a drunken state circulated on social media.

The East African country’s human rights record has been criticized by activists who accuse the government of President Paul Kagame of cracking down on dissent.