10 Popular Tanzanian Dishes To Try Out On Your Next Visit 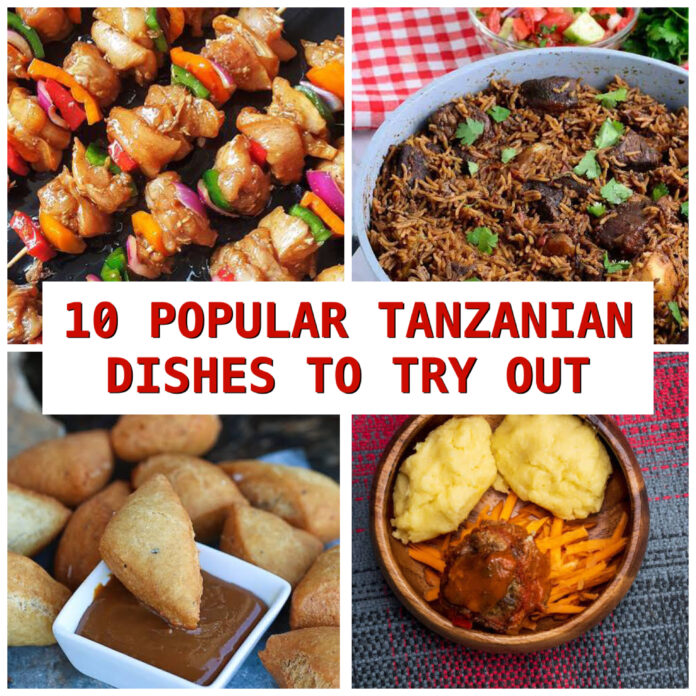 Tanzania is quickly gaining popularity as a tourist destination in Africa because it has everything travelers are looking for: stunning beaches, the Big Five, breathtaking scenery and safari adventures, opulent lodging, and, of course, delectable cuisine.

As we continue on our culinary tour, we go from Namibian dishes to Tanzanian dishes in this post.

Tanzanian dishes are a delectable fusion of Portuguese and Middle Eastern influences. Many of the dishes start with beans, coconut, and plantains and are then flavorful with aromatic spices, making them both tasty and nourishing.

The top ten traditional Tanzanian dishes to try out on your next visit are shown below.

The Mandazi is the East African version of the doughnut, minus the icing or frosting. It is a fried coconut bread made with coconut milk that has been spiced with cardamom and topped with flakes of fresh coconut.

These fluffy sweet sweets can be consumed for breakfast, a snack, or as dessert. They go well with a cup of tea, or “chai,” as the locals prefer to call it.

Tanzania, Uganda, and Kenya are just a few of the nations where this African food is particularly well-liked.

Sugar, flour, water, yeast, milk, or coconut milk are used to make the dough. It can also be enhanced with things like ground almonds or peanuts.

Hot oil is used to fry the dough after it has been fashioned into triangles, circles, or ovals. Mandazi can be enjoyed as a delightful appetizer before lunch, as a late-night snack, or even for breakfast with tea.

Mandazi is frequently served with fruit-flavored dips, but when it is offered as dessert, it is usually sprinkled with powdered sugar or cinnamon to give it some sweetness.

Corn on the cob is known in Tanzania as Mahindi Ya Kuchoma. Over open embers, corn is slowly cooked until it begins to brown.

Then lime and pepper or lemon chili salt are sprinkled over it. It is excellent, and purchasing it from a street seller is the best option if you want the best flavor!

Chipsi mayai, sometimes known as chips and eggs, is a common street snack in Tanzania. In order to create a dish that resembles an omelet with fries scattered throughout it, eggs and French fries are combined.

The meal can also be cooked with extra ingredients like bell peppers or onions. The kachumbari sauce, which is often served on the side and is made of tomatoes, onions, and chili peppers.

If you ever visit Tanzania and come upon a large, black wok outside of a restaurant that is sizzling with yellow oil, you can very well guarantee that they sell mayai chips.

This Tanzanian cuisine is an adaptation of Middle Eastern kebabs or Indian tandoori. Fish, beef, goat, chicken, or other meats are marinated, skewered, and then slowly cooked over open embers.

For a spicy flavor, the meat is cooked until it is scorched. Make sure to get more than one because the slow cooking procedure greatly improves the meat’s flavors.

It is a favorite among street vendors, especially after a long night of dancing.

Similar to Kenyan pilau, Tanzanian pilau is influenced by the Indian rice dish. The addition of more spices sets it apart from its Indian cousin.

Spices like cinnamon, cloves, cardamom, and pepper are added to cooked rice after it has been flavored with stock. You can add chicken, beef, fish, or eggs.

It is actually not one of the most common Tanzanian dishes, it is typically only prepared on rare occasions.

Tanzanians love this distinctive side dish that resembles polenta and is frequently served for breakfast, lunch, and dinner.

The ugali is an edible spoon that is frequently dipped into different stews and sauces. It is produced by rolling a tiny piece of creamy, thick cornmeal paste (made from cooked white maize) in a hand until it forms into a ball and putting an indentation in it with a thumb.

If it doesn’t stick to your fingers, it’s a good ugali. The entire item is typically dipped in a flavorful sauce before being eaten.

Ugali is a food culture in and of itself; it is more than just a flavor. Typically, this dish is served with any available meat, mashed vegetables, stews, or sour milk.

Rice and beans are referred to as Wali Na Maharage.

Typically, the rice is prepared with coconut milk and spiced with cinnamon, clove, star anise, cumin, and bay leaves.

The beans are cooked with seasonings and then dried. The recipe is simple to modify to use the cook’s local ingredients.

The most popular food in Tanzania is Mchicha. Typically, leafy greens like amaranth or spinach are used to make this rich, creamy vegetarian dish, along with grated coconut, coconut milk, peanut butter, tomatoes, and onions.

In order to create a filling main dish, it is advised to serve Mchicha with rice, ugali, or beans on the side.

The dish’s name translates to something that has been boiled.

To create a complete dinner, the vegetables are paired with meat or fish. Due to its high price when compared to other foods in Tanzania, mchemsho is regarded as a special dish intended for special occasions.

Although it has the same name as the classic Italian dish, this Zanzibari pizza is very different from Italian pizza.

Unleavened dough is used to make it, which is then filled with a variety of contents and stretched thin.

This pancake-like creation is filled, the sides are wrapped, and it is then fried in ghee till golden and crispy.

The filling can be made up of a variety of components, such as beef, chicken, fish, different vegetables, cheese, mayonnaise, or eggs. Different combinations of bananas, chocolate spread, mangoes, or peanut butter are frequently used in sweet variations.