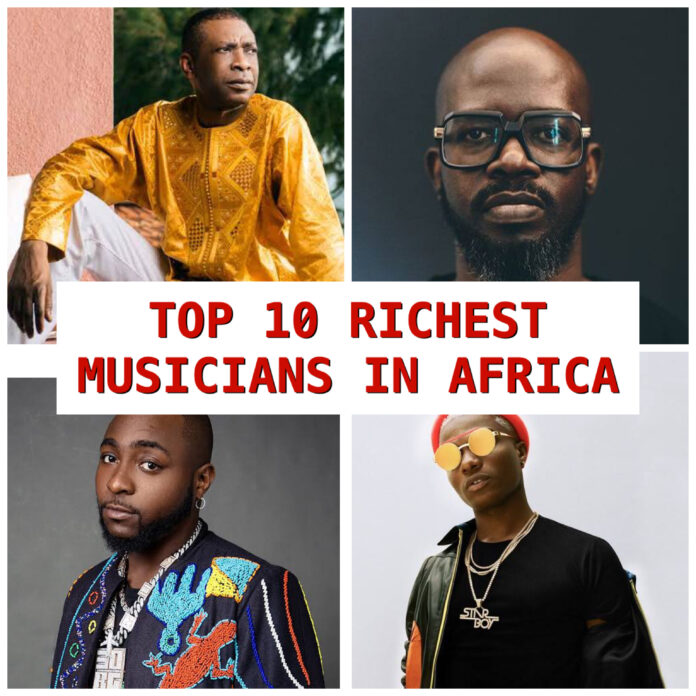 A growing number of brilliant African musicians are working hard to produce the best tunes, making the African music industry one of the fastest-growing music sectors in the world.

They have improved African music passed down from the best older musicians in Africa to rule the world.

African musicians are currently competing with other musicians all over the world and have won some of the world’s Grammy awards.

These performers have produced a great deal of amazing music in many different genres, which has been played across Africa and all over the world.

These musicians are among the wealthiest musicians in their respective African nations thanks to the wealth they have accumulated from their musical careers.

Additionally, they have become into the wealthiest musicians in Africa, with a large net worth.

Youssou N’Dour, a Senegalese musician is not only one of the oldest musician in Africa but he also tops the list of the richest musicians in Africa in 2022.

He was born in 1959 to a Wolof mother and a Serer father. He was previously dubbed Senegal’s most renowned living vocalist by Rolling Stone magazine.

When he joined Super Diamono at an early age, he began his musical career and gained worldwide recognition.

When he was 16 years old, the former Senegalese Minister of Tourism signed a contract with the record company Star Band, but left after two years to start Étoile de Dakar, a band that helped inspire Senegalese new generation music.

After releasing four albums with Étoile de Dakar, Youssou N’Dour established Jololi Music Studio in 1995. Thanks to the Mbalax music genre, the African musician has millions of followers all over the world.

Nkosinathi Innocent Sizwe Maphumulo, popularly known as Black Coffee is also one of the richest musicians in Africa with a net worth of about $60 million.

The well-known musician performs as a singer, songwriter, record producer, and DJ. He has been honored for his DJ work, notably with the DJ Awards’ Breakthrough DJ of the Year honor.

These recordings have enabled him amass enough money to surpass other musicians in terms of wealth in Africa in 2022.

The musician kick started his music career at the Durban University of Technology where he doubled as a back up singer for the South African singer, Madala Kunene.

Before his first hit, “Happiness,” Black Coffee recorded his first single with Hugh Masekela in the remix Stimela.

Numerous honors have been bestowed upon the well-known African musician, including 2015 Breakthrough DJ of the Year, SAMA’s Best Dance Album, Album of the Year, and Best Engineered Album International Recognition.

All nine of Black Coffee’s albums were created by him through the record company Soulistic Music, which he controls.

Among the top ten richest musicians in Africa in 2022, Wizkid comes in as the third richest artist. In 2022, it is anticipated that Wizkid’s net worth is up to 21 million US dollars.

The Nigerian artist became the first African musician to earn $1 million in a single performance when he was announced as one of the stars headlining the 2022 Rolling Loud Music Festival in September.

In addition to singing, Wizkid has numerous endorsement contracts with companies like GLO and MTN Nigeria, which paid him over $240,000 million to serve as their ambassador.

David Adeleke, commonly known as Davido, is one of the richest musicians in Africa with a network of about 19 million USD.

The affluent Nigerian family of Dr. Adedeji Adeleke gave birth to Davido in Atlanta, Georgia. His father is the co-founder of Osun state’s Adeleke University and the CEO of Pacific Holdings Limited.

The revenue from his songs and sponsorship deals, such as his $78,296 MTN endorsement deal, Guinness Nigeria, and Infinix mobile, is said to be some of what makes up Davido’s net worth.

Additionally, Davido participates in regional and international performances, earning up to $20,000 for performances in Nigeria and about $30,000 for appearances abroad.

With over 663 million views on his YouTube channel, Davido’s wealth and net worth have also increased.

Collins Don Jazzy, a.k.a. Michael Ajereh is not left out on the list of the richest musicians in Africa.

It is estimated that Don Jazzy is worth more than $18 million. He is not only a musician, but also a music producer, a businessman and the CEO of the Mavins Records Label.

Don Jazzy is renowned for producing high-quality music. His diligence and perseverance have helped him in his business relations with musicians both domestically and abroad.

Wande Coal, Tiwa Savage, Reekado Banks, D’Prince, and a host of other outstanding musicians have all been successfully developed and established by Don Jazzy.

In 2012, Burna Boy gained notoriety in the music business with the release of his top-charting single “Like to Party” from his self-titled first album.

Up to 40,000 copies of L.I.F.E were sold on the first day of release before the decision was made to sell the marketing rights to Uba Pacific for $20,000.

Burna Boy started his own record label, Spaceship Entertainment, in 2015 after leaving Aristokrat Records in 2014.

He had the second album of his career released on November 25, 2015, by his record company.

Burna Boy has had a successful music career, making waves both domestically and internationally.

In 2020, he launched his music album, Twice as Tall, which became a big hit both in Nigeria and abroad.

Twice as Tall also earned him a Grammy Award nomination for Best Global Music Album in 2022.

On our list of the richest musicians in Africa in 2022, Innocent Ujah Idibia, commonly known as 2Baba or 2Face, is ranked seventh with a net worth of about $16.5 million.

Despite being of Benue descent, 2Fcae was born in Plateau State on September 18, 1975.

Before going solo, he started his career with the Plantashun Boiz band. He appears to disappear from the music industry’s radar, as one might expect. But instead, he persisted and even thrived on his own.

He began his career by being signed to Kennis Music, where he issued his debut music collection, “African Queen.”

In 2004, The African Queen launched him to popularity. Since the release of that song, Tuface has continued to be at the top of his game, putting out big singles one after the other.

The MTV Music Awards, Headies, and BET Awards are just a few of the honors he has garnered. He is one of the wealthiest musicians in Africa in 2022 thanks to his work and perseverance in the music business.

A huge following exists for the Nigerian musician Rude Boy throughout Africa.

After winning the Grab Da Mic contest, the team put out their debut single, “Last Nite,” on the Timbuk2 record label.

The two vocalists advanced up the music industry in Nigeria. Their major tracks were E No Easy with J Martins, Chop My Money with Akon and May D, Beautiful Onyinye with well-known American rapper Rick Ross, among many more.

Prior to their breakup over differences in opinion, Rude Boy and his twin brother released six successful albums, five of which were under own record company (Square Record Label) and one under Timbuk2 Music Label.

After being split from his twin brother, Rude Boy started singing on his own. After settling their disagreements, the pair gave their first concert as a duo in Sierra Leone in 2022.

On our ranking of the richest musicians in Africa in 2022, the Nigerian singer-songwriter comes in at number nine.

The Nigerian King of Dancehall advanced through the music business’s ranks. Before becoming solo with K Solo’s assistance, he started out as a backup singer for other musicians.

His debut recorded song, True Story, was made available in 2005. Other chart-topping hits including “Gift and Grace,” which was released in 2008, and De Rebirth, his third studio album, followed True Story.

Timaya is the chief executive officer of the Dem Mama record label, where King Perry got signed. He was able to develop musicians like Runtown and Patoranking thanks to the emergence of DM Record.

Timaya, a prominent figure in the Nigerian music scene, has won numerous accolades over the years, including Best Reggae/Dancehall Album for his album True Story and Best Collaboration for “Good or Bad,” among many others, making him one of the wealthiest musicians in the continent.

He is recognized for singing primarily in Yoruba, which has helped him build a sizable fan base in Lagos and western Nigeria.

Olamide, who has about $12 million net worth, started his musical career with the Coded Tunes label but is currently concentrating on supporting a few other musicians through his YBNL record company.

His second album, YBNL, released shortly after Rapsodi and contained a few single hits that propelled him to popularity.

In the Nigerian music industry, he has won multiple accolades, including Best Indigenous Artist and Album of the Year. He has also been nominated for many awards.