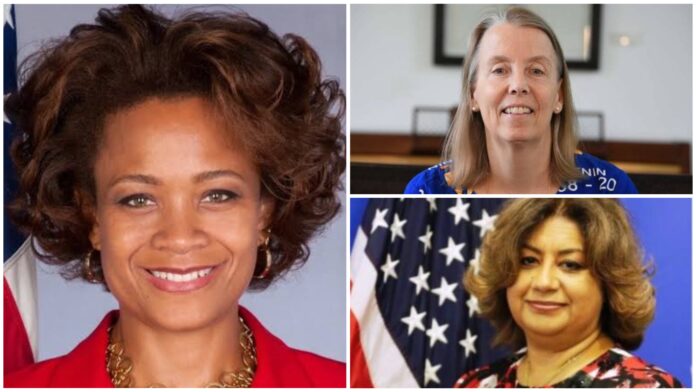 Three career US State Service diplomats answered questions from senators on Wednesday during a hearing to review their credentials to head US diplomatic missions in Africa.

If confirmed, three of the most difficult diplomatic missions abroad will be led by women, who have told lawmakers that serving on the diplomatic front is a privilege and that they feel obliged to do everything in their power to promote peace and prosperity in the regions.

Lucy Tamlyn, who currently serves as Chargé d’Affaires at the US diplomatic mission in Sudan, may soon be heading south to the Democratic Republic of Congo, the largest country in sub-Saharan Africa by area, as an ambassador.

In her testimony before the Senate Foreign Relations Committee, Tamlyn described the DRC as a country of enormous size, complexity and promise, saying, “The DRC’s dynamic, enterprising and creative population of over 100 million is eager to cooperate with the United States”.

At the hearing, Senator Chris Van Hollen, a member of the Foreign Relations and Appropriations Committees that oversee US foreign aid, pointed to the challenges Tamlyn faces.

The lack of governance coupled with the possession of vast natural resources formed the basis of some of the deepest challenges facing the DRC, Tamlyn said in response to Van Hollen’s question.

Tamlyn said it’s important to let the country and its people know that things can change.

“We want the Congolese people to know that corrupt mineral exploration, illegal logging and environmental degradation are not inevitable and that there are alternatives,” she said.

The commission also heard testimonies from two other career diplomats appointed to head embassies in Mali and Côte d’Ivoire, both in West Africa.

If confirmed, Jessica Davis Ba will represent the United States in Ivory Coast and Rachna Sachdeva Korhonen will lead the diplomatic mission in Mali.

The Ministry of Foreign Affairs currently classifies Mali in its travel advice as Level 4: Do Not Travel. Côte d’Ivoire and the Democratic Republic of Congo are both Level 3: Reconsider travel.

The three senior members of the U.S.A. The Foreign Service fully embraced the tasks that awaited them.

“If this is confirmed, my husband and our five children will go with me,” Davis Ba told lawmakers, pointing to her husband and eldest son sitting behind her.

Korhonen, whose family emigrated to the United States from India, told senators that when they looked at her, they saw “an American dream come true.”

Meanwhile, Tamlyn, whose home in the eastern US state of Rhode Island stands in stark contrast to the heat of Central Africa, said in her statement:

“I feel privileged to have served in countries where we are literally on the front lines, where US diplomacy really matters and stands shoulder to shoulder with colleagues who answer the call despite the personal, family, and health sacrifices involved.”

Representing US interests in these three countries and promoting economic and political development that sustains those interests will not be easy, Goldthwait said, but he does not doubt that the three senior members of the US Foreign Service are up to the challenge.