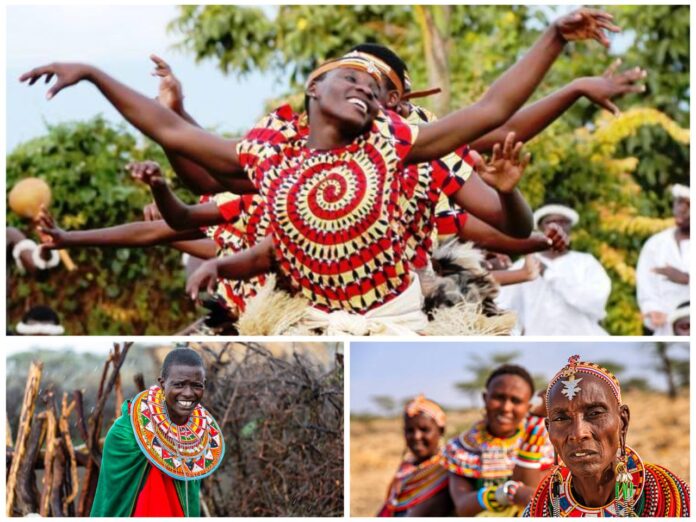 There are about 3,000 tribes in Africa. To understand or even have little knowledge of the different cultures of Africa, it is quite easy to focus on the major tribes while ignoring the smallest tribes.

There are many minor tribes in Africa that are just as unique in their culture as the larger ones and this article aims to highlight each of them in no particular order.

Here’s a curated list of the 10 smallest tribes in Africa.

The Dogon Tribe is one of the smallest tribes in Africa with an estimated four to eight hundred thousand individuals living in Mali and Burkina Faso.

The Dogon’s origins are derived from oral narratives. They are said to have come from Mande, which is located south-west of Bandiagara in Mali.

Historical research in the area appears to support this origin story. Between the 11th and 15th centuries, the Dogon traveled to avoid Islamization.

The Dogon speak the Dogon Languages, which are distinct Niger-Congo languages. The Dogon have their own religion, which they still practice, and live in small communities, as they have always done in the past.

According to Islamic law, their reluctance to accept Islam branded them dar al-harb (lit. area of war), making them significant targets for enslavement by Muslim neighboring powers.

The Karamojong Tribe is made up of approximately 370,000 individuals who live in North Eastern Uganda.

The Karamojong are a group of people who moved to Uganda from present-day Ethiopia at approximately 1600 AD, according to studies. They have their own language, which is known as Karamojong.

They are a pastoral tribe, and their main occupation is still animal herding, with crop farming being another occupation taken up in regions where livestock herding is not possible. They are a small tribe.

Protecting their property – livestock – from cattle raiders is one of the downsides of their work. As a result, weapons are commonly carried by Karamojong.

Until 2014, the military enforced the law in pastoralist-dominated areas of Uganda because the police were inadequately educated to deal with the Karamojong.

It took decades to reach the point where pastoralists were sufficiently disarmed for police to take over law enforcement.

The second disadvantage of relying on herding is that children from the Karamojong have lower levels of education and attendance at school.

According to a 2011 Ugandan government study, 45% of young males had no schooling at all, while 54% of girls had no education at all.

Children in charge of cattle are frequently too preoccupied to attend school. Lower educational attainment frequently has its own set of repercussions, such as lower lifetime wealth, lower lifetime income, less protection from climate change, and a struggle to influence the country’s political, social, and economic life.

Families that want their children to go to school usually give up herding and start farming. The disadvantage of farming is that it exposes you to a greater danger of drought.

The Karamojong has the biggest traditional settlement in East Africa and it’s a village called Nakipelemoru.

The San tribe has a population of approximately 105,000 people and is dispersed throughout Southern Africa. Botswana, Namibia, Angola, Zambia, Zimbabwe, and Lesotho are all home to the San tribe. They are one of Africa’s smallest tribes.

The San are also one of the world’s oldest tribes, having a distinct hunter-gatherer lifestyle that continues to this day.

Because of their history, they are Africa’s most genetically unique tribe. The San have a unique kinship structure and have always been a democratic culture.

The San are thought to have created the world’s oldest work of art and the first known application of paint at Blombos Cave, an archaeological site located east of Cape Town.

According to scientific analysis, the San have the oldest maternal line of Homo Sapiens DNA, indicating their roots date back 200,000 years.

The Kgalagadi tribe is found in Botswana and has a population of roughly 65,000 people. The Kgalagadi’s history is largely based on the tribe’s oral traditions.

The Kgalagadi clans have varied histories, but they all appear to agree and live in peace together. They may trace their ancestors back to Ngwato County.

Their major language is Kgalagadi, which they refer to as Shekgalagari in their native tongue. The Kgalagadi language is endangered, with approximately 40,000 speakers.

The Himba are an indigenous tribe with a population of roughly 50,000 people, making them one of Africa’s smallest tribes.

They can be found in Northern Namibia in the Kunene region, as well as in Angola on the other side of the Kunene river.

They are a Namibian indigenous tribe that has been there for about 500 years. They are mostly livestock farmers.

They are a small tribe, yet they keep their cultural rituals and follow a framework known as bilateral descent.

Every tribe member is descended from two clans: one through the father and one through the mother, also known as oruzo and eanda. Sons are raised by their father’s clan but inherit from their mothers.

Their main meal consists of sour milk, maize porridge, and occasionally just plain stiff porridge due to a shortage of milk and meat.

Cornmeal, chicken eggs, wild herbs, and honey are also included in their diet. Cattle are sometimes sold for cash.

The Himba speak the Bantu language which is Otjihimba.

The Ik tribe has a population of about 10,000 people. They are from North East Uganda. The Ik clan were among the first immigrants in Uganda’s Karamoja region, having come there thousands of years ago from Ethiopia via Kenya.

They speak their own language, which is called Ik (a member of Nilo-Saharan languages). The tribe lives in several small communities and is one of Africa’s weakest tribes.

The Ik tribe is currently shifting from a subsistence farming existence to a more Westernized way of life.

The Mursi tribe is a Surmic group of about 7,500 people that live primarily in Ethiopia and South Sudan. They are one of Africa’s smallest tribes.

The Mursi tribe lives in Omo Valley, an isolated region in Ethiopia.

They were a herding group that moved into Ethiopia’s highlands. They have migrated several times since then as a result of the Omo basin drying up.

They speak the Mursi language and use two orthographies to write it. They also practice Animism, which is their own religion.

Mursi women are known for their wooden lip plates, which serve as a sign of beauty and identity.

The lip plate has several meanings. For instance, it is a symbol of beauty. Secondly, it symbolizes devotion to the husband because it is worn with pride when giving him food.

If the husband dies, the lip plate is removed since it is believed that a woman’s exterior beauty fades following her husband’s death.

Finally, the plate serves as a striking visual representation of Mursi’s identity. Without it, they risk being misidentified as a member of another tribe.

They are an indigenous tribe that is on the verge of extinction. They have their own language and tribal customs that they adhere to this day.

The Kara is an Ethiopian ethnic group with a population of about 2,500 people. They are also known as one of the smallest tribes in Africa.

They speak their own language, which is known as Karo. The Kara and Hamer tribes share a same history, having originally been one tribe until splitting apart as they traveled in pursuit of better pastures and grazing.

To this day, relations between the two tribes are friendly. They live off of agriculture and fishing, and have developed their own method of fishing with a pointed stick.

El molo tribe is not only one of the smallest tribes in Africa, they are also Kenya’s smallest tribe, with about 200 tribespeople residing on the banks of Lake Turkana.

They left Ethiopia circa 1000 BC, or more than 3000 years ago. When they arrived at the lake, they abandoned their farming habits in favor of fishing. They have their own language, which is known as El Molo. They practice their own tribal religion as well.

Historically, the El Molo spoke the El Molo language as their native language. It is a member of the Afro-Asian family’s Cushitic branch.

According to Ethnologue and other sources, the El Molo language is on the verge of extinction, with no remaining speakers. The majority of the group members have now absorbed their neighbors’ Nilo-Saharan languages.

Despite the fact that permanent concrete homes are rapidly replacing them, the El Molo continue to live in huts on the shores of Lake Turkana.

A traditional religion centered on Waaq/Wakh worship is practiced by many El Molo. Waaq refers to the one God of the related Oromo civilization’s early pre-Abrahamic, monotheistic faith.

The smallest tribes in Africa may not be the most populous, but they have a culture that has been passed down for generations and languages that should not be lost.

These tribes may be small, but they are culturally and genetically diverse. In the instance of the San, we have been able to trace back humanity’s genetic ancestry through them.