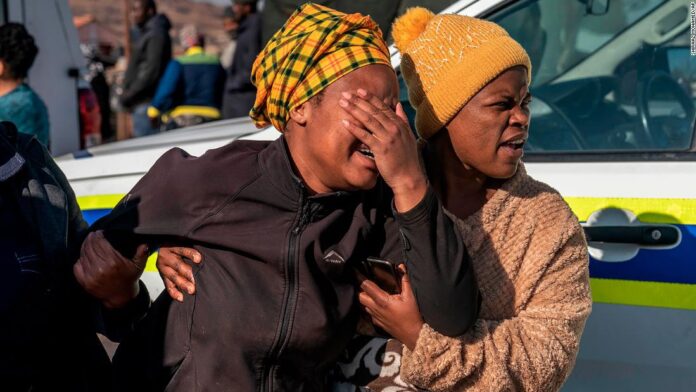 Fifteen people have been confirmed dead in a mass shooting at a tavern in a Soweto Township in Johannesburg. According to local authorities, the shooting spree also left others in critical condition.

South African police has since released a statement about the incident, claiming that it has its finest investigators looking into reports that a group of armed men arrived at the scene. Reports claim that they arrived at the scene in a minibus, after which they shot at patrons at the bar randomly.

Gauteng Province Police Commissioner Lieutenant General Elias Mawela explained that the investigation at the scene of the crime reveals some cartridges. These cartridges are believed to be an indication that a group of armed men truly opened fire at the bar.

“Primary investigation suggests these people were having fun here, in a licensed tavern that was open at the right hours,” Mawela told the Associated Press.

Mawela further explained that the patrons simply began to hear loud noise of gunshots and people screaming for help as they try to run for their lives. He revealed that details behind a motive are yet to be ascertained, but investigations at the scene show that a high-caliber firearm was used, and it was shot at random.

“You can see that each of these people was struggling to get out of the tavern,” Mawela told the Associated Press.

He claimed that because it was so dark where the incident occurred, it was more challenging to locate witnesses who could identify the suspects.

According to Colonel Dimakatso Sello, spokesman for the national police, rifles and a 9 mm pistol were used in the assault.

In a separate incident, on Saturday night in Pietermaritzburg, a seaside town, four individuals were shot and killed at a bar in Sweetwaters Township by unidentified attackers.

Information from police reveals that two men aggressively made their way into the tavern just after midnight on Sunday. After getting in, they randomly opened fire at patrons, killing two people on the spot, while two lost their lives at the hospital.

Currently, police claim another 8 people were in the hospital receiving treatment as they were injured during the unfortunate attack. So far, the age range of the dead individuals is between 30 and 45 years old, and police are investigating charges of murder and attempted murder.

“The team will work day and night to locate and arrest those responsible for this shooting,” said Kwazulu-Natal Police Commissioner General Nhlanhla Mkhwanazi.

Regardless of where these incidents occur, Ramaphosa believes that the government, citizens, and civil society structures, must all work together even more closely to improve social and economic conditions in communities, and reduce violent crime?