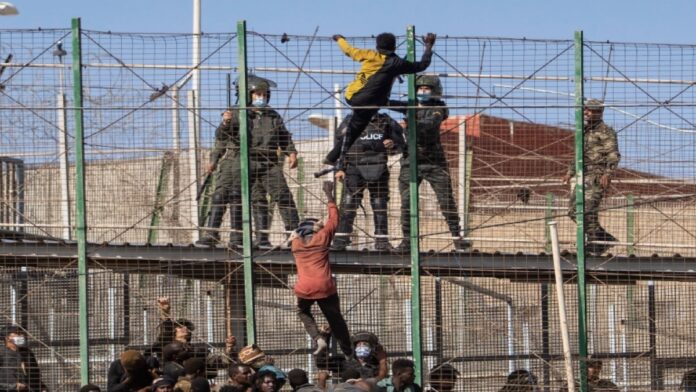 Dozens of people have reacted negatively to the controversial images of lifeless Africans lying helplessly at a Moroccan border fence.

As seen in the images, some bodies were bleeding out with no help arriving to help them. According to sources, some are purportedly dead and others are injured and would need immediate medical intervention.

Sources claim that the accident that led to the devastating sight happened after a mass crossing of migrants into the Spanish enclave on Friday. So far, 18 individuals have been confirmed dead, with others either injured or simply yet to be identified.

The Moroccan government has since responded to the images circulating on the internet. It revealed that the accident started after African migrants attempted to storm a fence into the “Melilla enclave.”

Authorities confirm that some migrants died after being crushed in the stampede, and others from falling from a fence.

The footage was first published on social media by the Moroccan Association for Human Rights (AMDH), a group known for its activities and defense of Migrants in warranted situations.

The organization posted the video on its Facebook page with a caption detailing as much information as was available at the time.

The AMDH branch head near Melilla, Omar Naji spoke to the press. He explained that the incident started early on Friday when about 2,000 migrants stormed through the border enclave, attempting to get into the Spanish territory.

The struggle by the authority to defend the border from the Migrants as well as that of the migrants to get into Spain continued for at least 2 hours. Soon, it led to a violent display from both parties, in a clash which eventually led to the deaths of some.

At least 100 people were able to cross the border, while others were seen lying at an enclosed corner where two high metal fences meet at what appeared to be a frontier gateway.

Although the Moroccan authorities reported 18 fatalities, AMDH reported 29. Spain on the hand claims there had been no deaths on their side of the border.

Both nations have denied responsibility of intentional violence. They claim that while attempting to scale the fence, migrants attacked border patrol agents with weapons, which led to the deaths of the stated casualties.

The violent and deadly border invasion, in which numerous Spanish and Moroccan law enforcement officials were also hurt, was attributed by Spanish Prime Minister Pedro Sanchez on Saturday to “mafia” people smugglers.

At a news conference in Madrid, Sanchez stated, “It was an attack on the territorial integrity of our country.”