At least 20,000 People, Including Famous Rappers, Show Up To Honor Late Rapper, Takeoff 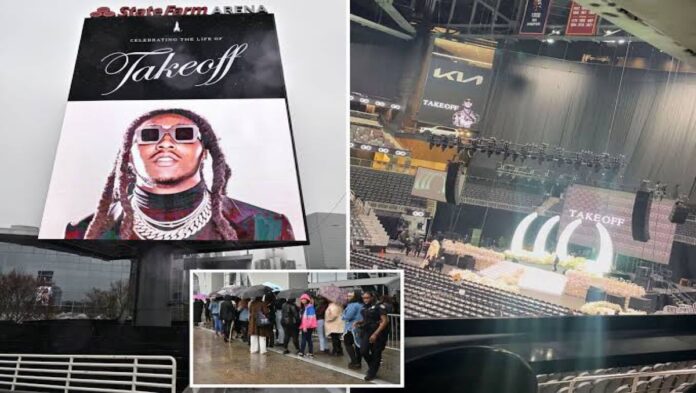 Fans and colleagues honor Takeoff at the city’s State Farm Arena, as the silent but influential member of the Atlanta rap trio Migos, who died on March 11, was laid to rest.

At 12:00 a.m. began a special celebration of life exclusively for Georgia residents. The event was in honor of a beloved son, grandson, brother, nephew, friend, and hip-hop star, Takeoff at a venue that can accommodate 21,000 people.

Takeoff, whose real name is Kirsnick Khari Ball, was shot and killed on the doorstep of a Houston bowling alley earlier this month after a private party with rapper, Quavo.

Quavo, 31, was not injured in the incident that led to the death of his nephew. Takeoff died of “gunshot wounds to the head and torso,” the Harris County Medical Examiner’s Office ruled last week.

Since then, the Grammy-nominated star – best known with Migos and releasing two #1 albums, Culture and Culture II – has been honored by numerous artists.

Among those honoring Takeoff were Gucci Mane, Ja Rule and friend and collaborator Drake, who toured with Takeoff’s group on the Aubrey & the Three Migos Tour in 2018.

Drake has postponed his long-awaited show at the Apollo Theater to join the celebration. “The Apollo Show has been postponed so that we can pay tribute to our dear friend this weekend,” Drake shared on his Instagram Story.

According to a statement from the rap group, Migos, and Motown, the media will not be able to cover the event from inside the arena and fans will not be allowed to capture footage.

The Atlanta Journal-Constitution reports that many Migos fans arrived earlier at the venue in the rain and waited to pay their respects.