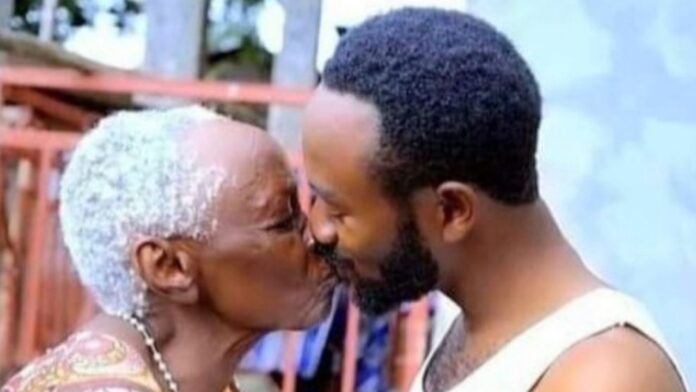 A 25-year-old Congolese man identified as Muima is set to walk down the aisle with his 85-year-old lover against all odds. The young man who is deeply in love with the woman said the way she treated him pushed him to fall in love with her.

The 85-year-old woman who is blessed with 8 children and 20 grandchildren is the landlady of the apartment where Muima and his friend reside.

Despite the huge age gap between them; the young man is head over heels in love with the 85-year-old woman identified as Thereza.

The love birds are set to take their relationship to the next level by getting married despite disapproval from the woman’s kids and the man’s friend Kakule.

Muima Reveals how he found love

He opens up in an exclusive interview with Afrimax. He revealed that he had left his country Congo for another African country (undisclosed) with the sole aim of continuing his education at the university.

Luckily for him, It happened that Thereza is the landlady of the house where he and his friend had rented. In the course of residing there, an incident made him realize she was the one for him. Muima said other ladies he had loved in the past were dramatic, but Thereza is just different and hopes she doesn’t die before him.

On how they miraculously fell in love, Muima recalled an incident that transpired one fateful Friday.

“I remember one Friday when my colleague wasn’t around, I was hungry and we had no food. I was very weak. And out of nowhere, the old woman brought me some food. She came and served me with too much care,” he said.

According to the young man in love, this was one of the many attitudes of the woman he had experienced that got him falling for her.

“The way she behaved and treated me pushed me to love her. Though she is an old woman and in reality could be my grandmother, so what! I love her.”

Showering encomiums on her younger lover, the mother of 8 kids and 20 grandkids said she loves Muima just as he loves her. Theresa said she is ready to risk it all for their relationship.

She said: “I am 85 years of age. I have 8 children and 20 grandchildren. According to my boyfriend’s age, he could be my 5th grandchild. He loves me and I also love him. I am now ready to put on the wedding dress and ring.”