5 Simple Ways To Relocate Abroad As An African 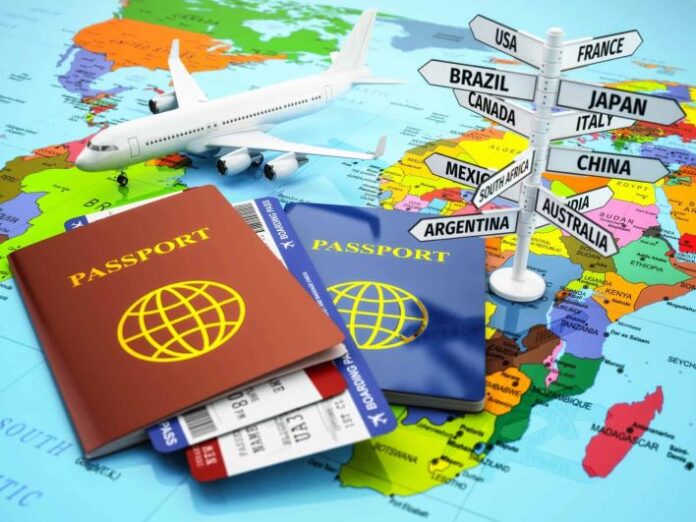 It’s no news that Africans are on the lookout for simple ways or opportunities to relocate abroad.

Some people choose to go abroad for a variety of reasons, including school, family, employment, or the desire for greener pastures.

According to Statista, in 2020, more than 40 million people relocated from Africa (East and North Africa especially) to other continents.

A study by the United Nations University showed that economic inequality, political instability, and climate change were among the reasons driving Africans to relocate.

Africa’s continent-wide survey also found that young and educated people were most likely than others to leave their home country.

However, research done by Afrobarometer in 2019 shows something interesting.

This should tell you that some African countries are still doing well and flourishing regardless.

Immigrating is an exciting idea, with the thought of getting to explore a new place and starting over as something new.

Unfortunately, making the jump and doing so can be difficult.

To immigrate to a new country, you have to consider some essential factors such as integrating into a different social structure and the financial aspect.

Most people are familiar with immigrating to the United States.

However, other countries have more welcoming policies for individuals interested in moving abroad.

For those who want to relocate abroad from Africa, this article is for you.

We also understand that the relocating phase can be very confusing and difficult.

That’s why we decided to share some useful insights by highlighting 5 simple ways Africans can relocate to Europe, North America, and other desired destinations.

Bonus tip: Also have it in mind that the process of legally migrating is rigorous.

From research to getting finances right, to find the easiest countries to migrate to, and deciding how you actually want to relocate.

Irrespective of what your reasons are for relocating abroad, we know you will find this article helpful.

The 5 simple ways to relocate abroad as an African are:

1. Relocating abroad as a student

This is the most feasible and popular option for young Africans wanting to relocate to the United Kingdom especially.

According to information available on the UK’s Home Office website, “the Graduate route allows the UK to retain the brightest and the best international students to contribute to society and the economy post-study under the points-based immigration system.”

It’s even better because the UK now lets international students stay and work for an extra two years after graduation.

Nevertheless, there are several ways to go about this route.

You can start by self-funding your study in the UK or getting a fully-funded scholarship that does not require you to go back to your home country after completion of your studies.

After getting your visa and eventually relocating, it is your duty to study hard and make good grades so that you can be desirable to employers.

While a student visa is typically not for relocating, being a student in various countries gives you a high chance of blending into society after you complete your studies.

Every country you want to relocate to has schools that offer courses for international students.
While some countries have a firm policy of making people return to their home countries after graduation, many others, like Canada, Australia, and Belgium, encourage people to stay.

If you are lucky, you can even get a job before graduating.

Is this a route you consider taking?

Then you should not worry so much about the cost because many European and Asian countries offer scholarships and cheap, or even free education to international students.

With good research and a good application process, we guarantee you a seamless process of relocating abroad.

We are sure that you’ve probably heard of the Canadian Permanent Residency Program.

This is the route most people (even from other continents aside from Africa) use to easily relocate to North America.

According to Business Insider Africa, the Canadian PR program is managed by Immigration, Refugees, and Citizenship Canada (IRCC), a Canadian government body.

The IRCC simplifies the entry of permanent residents in a way that makes the best use of their economic, social, and cultural contribution to Canada while at the same time protecting the health, safety, and security of Canadians.

To relocate to Canada from Africa through the Permanent Residency route, you will need to pass the eligibility test.

Passing the eligibility test is the first step. Other information on what to do next can be found on the Canadian immigration office’s website.

3. You can relocate abroad as a professional

Another relatively simple way a lot of Africans use to easily relocate abroad is through the skilled labor route.

As the name says, this path requires you to be capable of working in order to contribute significantly to the economy of the country to which you intend to relocate.

Countries like the UK, Canada, Australia, and more are always on the lookout for doctors, nurses, radiologists, IT professionals, and other skilled workers.

And this in turn presents countless opportunities for Africans.

However, like other routes, you will have to pass a number of tests as well as meet other criteria before you can relocate.

Also, note that companies with global operations (such as PwC, Ernst $ Young, Nestle, KPMG, etc.) regularly assist in the visa application process for some of their African employees.

4. You can relocate using the spousal Visa Route

Different countries have different conditions for a spousal visa.

In spite of this, the first step is to fall in love and eventually marry the love of life who is a resident abroad.

After that, find out the spousal visa requirements for the country he or she is resident in.

Whether it’s your spouse or your family member, having family members who are citizens or permanent residents of other countries is a direct way of relocating from Africa to abroad.

This route is however not straightforward like other routes because most countries try to avoid doctored marriages for visas.

Many countries have to do background checks before giving people their new passports through this process.

Some of these background checks may include finding out how long you were dating before you got married, needing citizenship applicants to show authentic pictorial proof of dating period, wedding ceremony, mutual friends, etc.

You also have to have been married for at least five years in some countries before applying for citizenship.

There is also something called “Family reunification”.

According to the International Organization for Migration, Family reunification is “the right of non-nationals to enter into and reside in a country where their family members reside lawfully or of which they have the nationality in order to preserve the family unit”.

In this scenario, you have to be able to legally prove that you’re either the spouse, parent, or child of the “principal migrant”.

The laws for family reunification vary from country to country so you have to do your research based on the country you plan to relocate to.

This route is mostly preferred by high-net-worth Africans.

As its name points out, it mostly involves securing the citizenship/passport of another country by way of investing in the country.

Again, this is not a route that is available to most Africans.

However, if you have the finances to explore it, why not.

Some countries have investor visas, where if you invest a certain amount of money in the economy, you without a doubt become a permanent resident or a citizen.

Some other countries allow you to become a permanent resident when you buy land and properties.

You could also relocate by starting a business in countries that allow this option because you would be helping their economy.

In some other countries, you can buy citizenship.

Of course, relocating abroad might not be the right option for everyone.

What’s more, not everyone can make this decision on a whim, or with a lot of things to consider and factor in.

Relocation is a big decision, one that requires a lot of planning, reflection, and strategy.

Knowing why you want to relocate is an important first step in this process. Once that is sorted, you are good to go.

Whether or not you are successful depends solely on how hard you try and is completely up to you.

Hopefully, by giving you this information, we have helped you decide if relocating abroad is right for you.