8 Most Popular Festivals in Nigeria 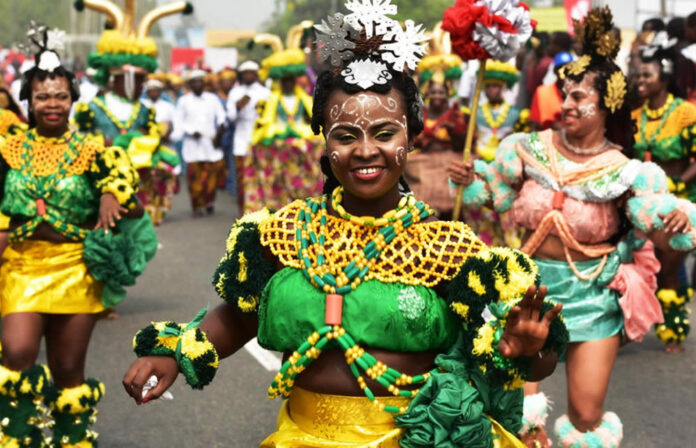 In Nigeria, festivals are cultural, traditional, and social gatherings that are observed in a variety of social, religious, and cultural contexts.

The majority of these most popular festivals in Nigeria are held in honor of the gods and deities of the various tribes who participate in them. Others are observed to fulfill specific religious and cultural traditions.

Societies and cultures with similar beliefs and customs celebrate a number of holidays together.

Most festivals are observed annually at the same time, hence the festival calendar is typically stable. Other festivals are identified by occurrences of nature, such as moon phases, the first or last rain of the year, etc.

Nigeria is blessed with a variety of tribes and ethnic groups, each with its own languages, cultures, and traditions, and 36 states (including the federal capital area).

Every one of these tribes celebrates a distinct festival at a different time of the year and for a different cause.

Some of these tribes participate in the same festivals, while others are exclusive to a certain tribe.

These celebrations are typically vibrant and fun, showcasing the people’s rich cultural heritage through masquerade performances, vibrant cultural dances, the performance of religious ceremonies, and the display of the different delicacies of the tribe(s).

Aside from the various cultural festivals held in Nigeria, there are also some festivals held to celebrate and promote Nigerian art, especially in the music and Film industry.

Here in this post, we’ll provide you with a rundown of the most popular festivals in Nigeria.

The Eyo festival, possibly the most well-known celebration in Nigeria, is observed by locals in Lagos, Nigeria, sometimes referred to as Isale Eko.

It is typically observed in May and includes a vibrant traditional masquerade show and a variety of regional dance performances.

The masquerades, which are one of the festival’s main draws, comes out of the Iga, or palace, of the Oba or one of his cabinet members.

The Eyo festival is a prominent tourist attraction in the city of Lagos and the festival is known for its vibrant colors and extensive displays of Yoruba culture and history.

The festival was once held to usher in the new king or chief and to escort the soul of a deceased king or chief.

The “ogogoro Eyo” masquerade, which represents the spirits of the deceased is dressed in white and performs at the celebration.

The masquerades that appear during the festival are also referred to by the term “Eyo.” Eyo is frequently cited as the inspiration for Brazil’s current carnival. During the festival, no one is permitted to wear caps.

It is actually an exciting festival to experience, so when next you visit the city of Lagos in May, be sure to have a thrilling time at one of the most popular festivals in Nigeria.

Osun Osogbo festival is not only one of the most popular festivals in Nigeria, it is also one of the largest and most magnificent events in Yoruba territory which dates back to the time of our ancient ancestors in the Yoruba tribe, namely the province of Osun.

This festival has earned a prominent place in Yoruba history. It is a communal celebration that is not only observed seasonally but also spreads through the entire community.

One of the first in West Africa to be fully recognized as an intangible cultural heritage site of mankind is Osun Oshogbo groove, which has been designated as such by UNESCO.

The town of Osogbo is where Osun Osogbo originated, and as a result, there are numerous traditions relating to the beginning of this celebration.

A sacred element of this event is the goddess Osun. The river that runs through Osun Osogbo territory is represented by Osun Osogbo.

The Osun-Osogbo festival, which takes place in Osun state, Nigeria, during the month of August, is a two-week celebration that highlights the rich cultural legacy of the Osun people.

The celebration, which is held at the revered Osun Groove, is one of those occasions when a deity, the goddess of Osun River is honored.

The extensive cultural displays shown at this historic event, in addition to the sacrifices and traditional ceremonies carried out there, make this celebration worthwhile.

The goddess is a riverine of fertility and the sole female goddess of the sixteen that the Olodumare assigned and selected for the organization and planning of the material human world, according to Oluponna (1991).

This festival is typically observed in August as a way to honor the deceased ancestors through rituals and look for solutions to issues.

The festival’s official opening ceremony, known as Iwopopo, involves the official cleaning of the roads leading from the palace to the Osun temple in the Gbaemu neighborhood of Oshogbo. This practice has both physical and spiritual cleansing purposes.

The “Etutu,” a peaceful ritual performed to remember the former Ataojas (Monarchs) of Osogbo land and to ensure peace and harmony between the residents of this village, is one of the important events of the twelve-day festival.

The Ataoja (Monarch) himself directs the ceremonial movement, and an Arugba Osun, a votary maid from the royal family who must be a virgin between the ages of 13 and 16, will bring the ritual calabash to the Osun groove.

The King then climbs a rock in the river and extends his palms in greeting to the Osun fish, which usually emerges to accept the sacrifice from the King. It was from this occurrence that the King derived his title Ataja or Atewogbeja.

The Argungu fishing festival, which is particularly popular in Kebbi state in the northeastern region of Nigeria, is also one of the most popular festivals in Nigeria.

Every year, the event is held, and residents of the state of Kebbi are welcome to attend.

The festival gives fisherman the chance to compete against one another in order to determine who uses traditional nets to catch the biggest fish.

The festival is enjoyable and features numerous vibrant events and decorations.

The celebration, which is usually held over two days in December and January in honor of the Obi of Onitsha, is said to as the most significant remaining traditional ceremony of Onitsha natives.

The festival begins with the customary 21-gun salute and continues all night long with royal gong (Ufie) banging, dancing, and cultural events.

The Igbo people, notably those who are natives of Onitsha, Umueri, Umuoji, and other nearby areas like Aguleri, Nnewi, and Ukpo in Dunukofia Local Government Area, conduct the Ofala Festival every year.

It acts as a ritual for the king, Igwe, or Obi, and is comparable to the Igue Festival in Benin and the Ine, Osi, or Ogbanigbe Festival in several mid-West Igbo towns of Nigeria.

The event, which is usually celebrated by the Obi (English: monarch) over the course of two days in December, is a responsibility that must be upheld yearly without fail.

The Ofala Festival, according to certain oral history sources, dates back to the 16th century, when Onitsha people moved from Benin to the eastern banks of the River Niger, where they founded the city of Onitsha.

They carried with them, among other traditions, the monarchical tradition. Additionally, some historians argue that the celebration is associated with the New Yam Festival in Onitsha and the king’s commitment to the security of his subjects.

The event signifies the conclusion of a period of seclusion known as Inye Ukwu na Nlo, during which the Obi stays incommunicado and goes through a spiritual purification process for the benefit of the community.

The highlight of the festival is when the Obi appears in his royal regalia to the applause of the crowd.

A cannon shot signals the entrance of the Obi, who typically wears a ceremonial robe and holds a bronze sword in his hand.

He usually enters from the sides of the arena or from one-third of it, acknowledging the applause of the crowd.

The Obi then leaves office and the red cap chiefs pay him respect in order of seniority. After another cannon boom, the Obi and the chiefs both resurface.

In his second appearance, Obi performs a rarely seen dance in the arena, covering a greater distance with each step than in his first. Then the guests and visiting chiefs honor the Obi.

The event occasionally serves as a venue for the Obi to recognize people who have attained chieftaincy titles.

Awujale, the supreme king of Ijebu-Ode in Nigeria, is honored with the cultural festival of Ojude Oba.

When the Awujale granted Muslims land so they could construct a mosque, the event was first held in 1892.

Additionally, he gave British missionaries the property on which Ijebu’s first church was built.

Although the celebration began as a Muslim religious holiday (it takes place on the third day of Eid-el-Kabir), it is now commemorated by the majority of Ijebu people.

The lavish celebrations and partying, which include dances by many groups dressed in complementary traditional attire, draw tourists.

The main draws during Ojude Oba are the warriors’ horse displays, the vibrant traditional clothing worn by ethnic groups, and the beauty pageants.

In honor of the Oba Adesumbo Tunwase of Ijebu, the Ojude Oba festival was first held in 1882.

In the Oba Palace, the festival is often observed on the third day of Eid Kabir each year. The name is coined from two Yoruba words meaning “Festival in the King’s court”.

One of the most vibrant events in the northern region of Nigeria is the durbar festival, also known as Hawan Sallah or Hawan Daushe.

It shows a regal procession of tens of thousands of men riding horses and wearing various colorful costumes.

The festival, which is often held at the conclusion of Eid al-Fitr and Eid al-Adha celebrations, begins with prayers and is followed by a vibrant musical procession of the Emir and his horses.

The event continues after the parade at the Emir’s palace with a number of competitions and vibrant displays.

A fantastic version of African music from the nation’s north is also included. Noblemen travel to the Durbar festivities to honor the Emir and renew their allegiance to their respective emirates.

Felabration, an event honoring the legendary Fela Kuti, provides a spectacular exhibition of African and Nigerian music, particularly in the Afrobeat genre, which Fela pioneered.

Felabration is undoubtedly one of the biggest and most popular festivals in Nigeria, drawing more than 1 million viewers from across the world and drawing over 30,000 people to the event at the New Afrika Shrine.

The festival, which is celebrated in more than 40 nations worldwide, is held in honor of Sango, the third king of the Oyo people who evolved into the thunder- and fire-related deity.

Over 20,000 visitors from around the world attend this festival over the course of a week. It is also acknowledged as a cultural heritage by UNESCO.