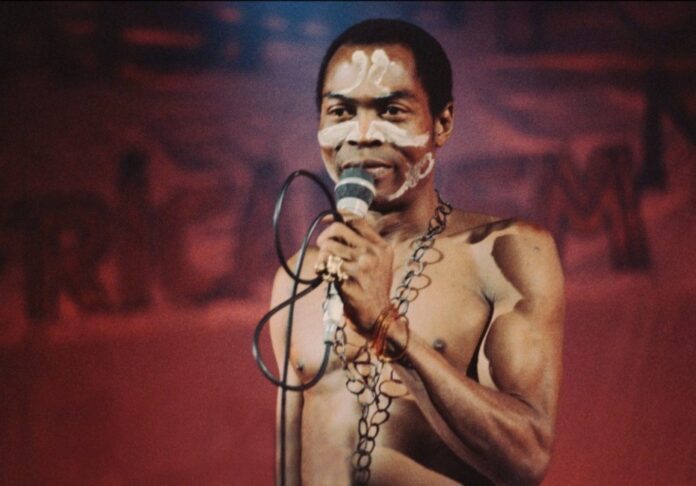 He was the son of Chief Funmilayo Ransome-Kuti, a feminist and labor activist, and his father, Reverend Israel Oludotun Ransome-Kuti, an Anglican minister and school principal who was the first president of the Nigeria Union of Teachers.

At the height of Fela’s popularity, he was referred to as one of Africa’s most charismatic musical performers. In fact, Fela is globally recognized as the pioneer of the Afrobeat music genre.

Born into a wealthy family, one can assume that Fela had a nice experience growing up. He had a sister named Dolu and two brothers named Olikoye Ransome-Kuti and Beko Ransome-Kuti who were both respected medical doctors in Nigeria. Fela was also a cousin to Wole Soyinka, a writer who became the first African to win the Nobel Prize for Literature.

Fela had his secondary school at Abeokuta Grammar School and worked as a clerk at the ‘Federal Ministry of Commerce for a short while upon graduation from secondary.

In 1958, Fela was sent to Britain to study medicine but he switched his course to music instead. The legendary musician was tutored at Trinity College of Music where he developed an interest in blowing the trumpet. During his time in London, Fela started his first band called Koola Lobitos.

The band was a musical group that was known for playing a combination of highlife and jazz with native African drums.

He got married to his first wife, Remilekun (Remi) Taylor in 1960, with whom he would have three children (Femi, Yeni, and Sola).

CAREER
Fela then moved back to Nigeria in 1963, restructured his band, and trained as a radio producer while working as a trumpeter with Victor Olaiya, another recognized music legend in Nigeria.

On his trip to Ghana in 1967, Fela for the first time called his music Afrobeat.

In 1969, Fela took his reformed band on a 10 month trip to the USA. It was during this trip that the musical legend discovered the Black Panther movement through Sandra Smith (now Sandra Izsadore). The Black Panther activist then introduced him to the politics of Malcolm X. This made Fela develop an interest in activism, as the legend credits the experience with being a catalyst in his political involvement.

After this, Fela renamed his band ‘Nigeria ’70 but ran into trouble with the US immigration and this caused his return to Nigeria.

When Fela and his band returned to Nigeria, he changed the band name again to ‘Afrika ’70” and formed the Kalakuta Republic, a commune, a recording studio, his home, and a home for people connected to the band, in 1974.

Fela’s band was known for featuring two baritone saxophones, while most groups used only one of these instruments. His bands sometimes even performed with two bassists at the same time, both playing interlocking melodies and rhythms.

Fela’s music is also known for the call-and-response within the chorus and figurative but simple lyrics.
His songs are very long, at least 10–15 minutes in length, and many reached 20 or even 30 minutes, while some unreleased tracks would last up to 45 minutes when performed live.

Fela was outspoken and his songs literally spoke his opinions on social issues. His rise in popularity throughout the 1970s signaled a change in the relation between music as an art form and Nigerian socio-political discourse.

One of his popular songs, “Beast Of No Nation”, refers to Buhari as an animal in a madman’s body; in Nigerian Pidgin: “No be outside Buhari dey ee, na krase man be dat, animal in krase man skin ii”.
Fela strongly believed in Africa and always preached peace among Africans. He thought the most important way for Africans to fight European cultural imperialism was to support traditional African religions and lifestyles.

Fela also had a nightclub that was first called Afro-Spot and later changed to Afrika Shrine. In his club, Fela performed regularly and conducted Yoruba traditional ceremonies in honor of his ancestral faith.
He also changed his middle name to Anikulapo, which translates to “He who carries death in his pouch” because he claimed his original middle name, “Ransome” was a slave name.

In 1977, Fela and ‘Afrika ‘70’ released ‘Zombie,’ a political piece that criticized the system of the Nigerian military.

Although the album was very popular, it, however, received a lot of backlash from the Nigerian government to the extent of having the Kalakuta Republic attacked and destroyed by 1000 soldiers. It was so terrible that Fela sustained injuries and his mother was thrown out of a window.

He was also known for his involvement in drugs and for marrying 27 wives, many of whom were his dancers, composers, and singers in 1978.

Still, in 1978, Fela was also marked by two notorious concerts, the first in Accra, in which riots broke out during the song “Zombie,” which led to Fela being banned from entering Ghana. The second was at the Berlin Jazz Festival, after which most of Fela’s musicians deserted him, due to rumors that Fela was planning to use the entire proceeds to fund his presidential campaign.

In 1979, Fela formed a political party called the Movement of the People with the intention of running as the president of Nigeria, which was later unsuccessful.

It was during this time he created yet another new band and called it Egypt ’80.

Five years later, Fela was jailed for 20 months on charges of currency smuggling by Muhammadu Buhari’s government. Upon his release, he turned away from active political protest and left his son, Femi, to carry the torch of Afro-beat music. Fela was jailed again in 1993 for murder, but the charges were dropped not long after.

Amnesty labeled him a prisoner of conscience, and his case was again taken up by other human rights groups. After 20 months, Fela was released from prison by General Ibrahim Babangida. On his release, he divorced some of his wives and kept only 12 wives, saying that “marriage brings jealousy and selfishness”.


MUSIC LIFE AFTER CONTROVERSIES
The musical legend continued to release albums with Egypt ’80, made a number of successful tours of the United States and Europe, and also remained politically active. In 1986, he performed at Giants Stadium in New Jersey as part of the Amnesty International A Conspiracy of Hope concert, sharing the bill with Bono, Carlos Santana, and the Neville Brothers.

In 1989, Fela and Egypt ’80 released the anti-apartheid “Beasts of No Nation” that showed on its cover U.S. President Ronald Reagan, UK Prime Minister Margaret Thatcher, and South African State President Pieter Willem Botha; the title of the composition, Barrett noted, evolved out of a statement by Botha: “This uprising [against the apartheid system] will bring out the beast in us.”

In the 1990s, Fela’s album output slowed down and he eventually stopped releasing albums again.
In 1993, he and four members of the Afrika ’70 organization were arrested for murder and rumors started spreading that he was suffering from an illness for which he was refusing treatment.

However, there has been no definitive proof that Kuti died from complications related to HIV/AIDS.

More than one million people attended Fela’s funeral at the site of the old Shrine compound. His youngest son, Seun, took the role of leading Fela’s former band Egypt 80. As of 2020, the band was still actively releasing music under the moniker Seun Kuti & Egypt 80.

LEGACY
Fela is remembered as an influential icon who was brave enough to boldly voice his opinions on matters that affected the nation through his music.

His music has also inspired the likes of Nigerian musicians like Burnaboy and Wizkid who publicly acknowledges that.

An annual festival “Felabration” is held each year to celebrate the life of this music legend and his birthday.
Since his death in 1997, there has been a revival of his influence in music and popular culture, culminating in another re-release of his catalog controlled by Universal Music.