A Moroccan and Two Brits, Sentenced To Death By DONBAS Court For Fighting For Ukraine 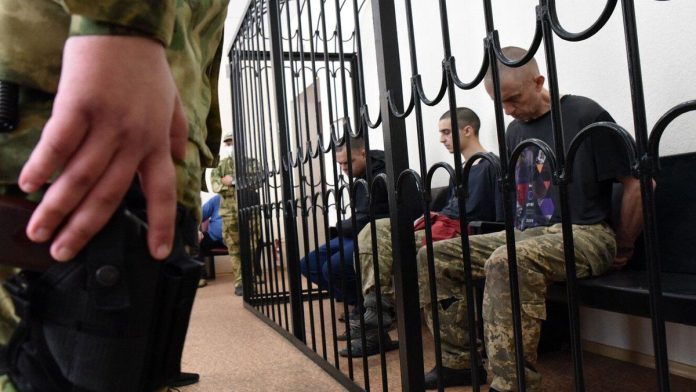 According to Russian news media, a court in the self-proclaimed Donetsk People’s Republic (DPR), one of Russia’s proxies in eastern Ukraine, sentenced two Britons and a Moroccan to death on Thursday while fighting for Ukraine.

According to the Interfax news agency, the court found the three individuals—Britons Aiden Aslin and Shaun Pinner, and Moroccan Brahim Saadoun – guilty of “mercenary operations and conducting actions intended at gaining power and toppling the DPR’s constitutional order.”

After Russia invaded Ukraine on February 24, the three guys were seized while fighting for Ukraine against Russian and Russian-backed forces.

Their attorney stated that they would file an appeal against the decision of the court. However, the British government denounced the court’s decision as a “sham judgment.”

Foreign Secretary Liz Truss, tweeted in response to the judgment, stating that she “utterly condemn the sentencing of Aiden Aslin and Shaun Pinner held by Russian proxies in eastern Ukraine.” She called the individuals “prisoners of war” and that the judgment is a “sham with absolutely no legitimacy.”

According to Prime Minister Boris Johnson’s spokesman, “prisoners of war” are entitled to combatant immunity under the Geneva Conventions and should not be charged for participating in hostilities.

Robert Jenrick also shared his opinion, the member of parliament for the district where Aslin’s family lives stated that the event and unfortunate judgment of the young men who are now being called “victims” resembles a “Soviet-era show trial.”

As seen in a video supplied to the trial by the RIA Novosti news Agency, The three men were detained in a cage with black bars, guarded by troops with their faces masked and wearing armbands with the pro-Russian “Z” symbol.

Due to its controversial status, the trial is believed to have taken place behind close doors, with Pinner and Saadoun pleading guilty to actions aiming at the violent seizure of power less than 24 hours before the judgment. Aslin on the other hand, appeared to have entered a plea to a felony involving guns and explosives.

While at the court, judge Alexander Nikulin told reporters that “The evidence presented by the prosecution in this case allowed the court to pass a guilty verdict, not to mention the fact that all the defendants, universally, pleaded guilty to all charges.”

The judge added that “When passing the verdict, the court was guided not only by the prescribed norms and rules, but also by the most important, unshakable principle of justice.” He explained that the “prescribed norm” led to the decision to apply an exceptional measure of punishment, which happen to be the “death penalty.”

The DPR is one of two Russian-backed separatist entities in eastern Ukraine’s Donbas region that Russia claims it is fighting to liberate from Ukrainian forces.

Russia recognized them as independent republics three days before commencing its invasion of Ukraine on February 24, a move Ukraine and the West condemned as illegitimate.

Worth noting is that the DPR is not recognized by the United Kingdom, and the country has not officially engaged with local officials in the case.

Dmitry Peskov, a Kremlin spokesman, said earlier this week that if London takes the matter to the DPR directly, it might amount to “de facto” acceptance of the region’s independence.