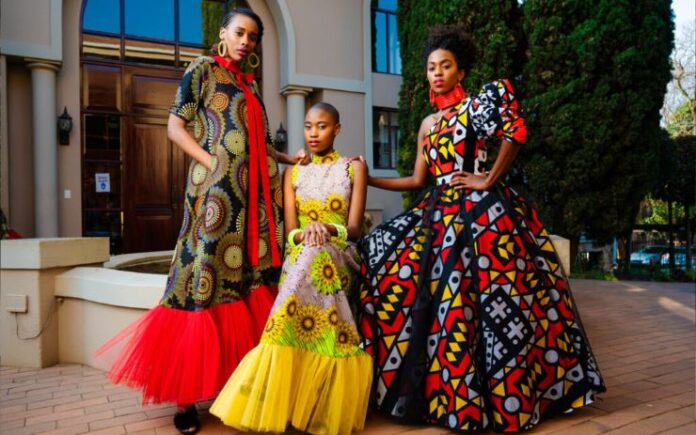 Along with its dazzling and intriguing textiles, African fashion has a rich and interesting history.

It is estimated that this history dates back 75,000 years! Ancient art provides us with clues regarding the fabrics used, despite the fact that it can be challenging to trace the development of African forms.

There are random scribbles from as far back as 3000 BC that depict loom drawings, and Egyptian art implies that flax weaving dates back to 5000 BC.

Early African clothing was made from animal skin, fur, feathers, and bark fabric, which may not have been the best material for the region’s often hot climate.

These textiles are said to have been primarily utilized as robes that were draped across the body and aprons that were wrapped around the waist. Later, more breathable textiles like cotton were used for cloth-making.

Africa has been viewed in many different ways, with large parts of its past still influencing its possibilities for growth. This is hardly surprising given the depths to which Africa’s riches reach and the fact that African design is one of the most influential historical relics to have shaped our way of life and traditions as a continent.

The vibrant, creative African cloth and designs that exist now are a result of the amalgamation of this rich culture.

The impact of African culture on fashion

Due to the immense cultural diversity of the continent, African fashion is multicultural. Ancient African clothing ranged from vividly colorful textiles to robes with abstract embroidery to exquisite beaded bracelets and necklaces.

By all accounts, African culture is where the distinctive roots of African fashion are found.
It is hard to tell how African clothing—and fashion, in general—evolved since there are so few historical documents.

However, a substantial chunk of the history of early African dress has been pieced together from artwork, oral narratives, and customs.

Also, there is one thing to note. Africans have never been so concerned with warmth. They didn’t dress in such a way that they needed to be both stylish and warm at the same time. Actually, early clothing was made from animal hides and skins in Africa.

The wearing of full robes in the ancient African culture denoted status, participation in a ritual, or the passage of time as people moved from one stage of their lives to another.

Africans primarily express themselves through textiles, which aids in establishing their identity. Different African civilizations have worked incredibly hard to use textiles to honor their past.

For many years, people have utilized fabric as a means of decorating and artistic expression.

Being “proudly African” today entails more than just saying it; it also involves doing it. Thankfully, contemporary African designers are highlighting the parallels and variations between earlier and more contemporary forms of artistic expression in Africa by using our unique fabric.

The development, design, and embroidery of traditional African textiles date back thousands of years and have been used to convey important cultural knowledge.

If you want to gain a better understanding of the various cultural, social, religious, and political facets of African cultures, you can think about adopting African textiles.

Aso oke: a textile made by the Yoruba people of southwest Nigeria on a handloom.

Kente: it is a distinctive and modern expression of Ghanaian culture.

Ndop: The “Bamenda Gown” is a traditional Cameroonian garment that is typically hand-embroidered with wool fiber in a range of colors.

Kitenge: is a heavy, old fabric from East Africa that was printed using rotary spinning equipment. This cloth is long enough to cover the entire body

Boubou: commonly referred to as the West African robe or the African kaftan.

African Fashion designers to look out for

African motifs, designs, and textiles have throughout time made a comeback into the global stage thanks to the innovative influence of the industry’s leading lights and trailblazers.

Over the past years, Africa’s culture and fashion have attracted a lot of attention on a global scale.

There is evidence of a new generation of designers in Africa and the diaspora who have started to advance in the fashion industry, yet the rise of African designers cannot be defined with confidence.

These ones are continually breaking new ground to reach incredible heights of innovation and originality thanks to a unique blend of the rich, deeply embedded cultural African textiles and the present-day requirements of the global fashion business.

The need to recognize and work with a wider range of African designers has spread across national boundaries due to this region’s distinctive diversity and cultural contributions.

Additionally, this is what caused African fashion to suddenly become quite popular. African fashion is increasingly being pushed online, with websites dedicated to the continent’s fashion sectors in South Africa and Nigeria obviously leading the way.

This is in addition to the intercontinental collaboration between African designers and others.

If you want to look for current African fashion labels, you’ll immediately find that there are a ton of them.

This is due to the daily modernization of African attire made possible by African fashion designers.

It used to be very difficult to get African clothing, but that’s no longer the case. In reality, the current generation of well-known African designers is currently using truly cutting-edge concepts to help bring the textiles seen as traditional into the future.

The list of African designers who are following the contemporary road while infusing African heritage is provided below.

Emmanuel Okoro of Emmy Kasbit concentrates on reinventing “Akwete,” a textile made by Igbo women in eastern Nigeria using a loom.

Every piece by Lisa Folwaiyo has a unique tale to offer, from conception to completion. By fusing various materials and vibrant colors, Lisa Folawiyo creates prints that are artistically pleasing to people all over the world.

The British-Ghanaian designer Ozwald Boateng is recognized for adding his own unique spin to traditional British tailoring. The Ozwald Boateng brand is well-known for its classic suits, coats, tailed pants, and other men’s clothes in the UK and throughout the world.

In 2009, Loza Maléombho, who was born in Cote d’Ivoire, established the Loza Maléombho brand in New York, which blends traditional Ivorian details with cutting-edge fashion.

Despite the fact that traditional customs still coexist with western trends, the long-established textile business in weaving, dyeing, and printing has given rise to modern dress patterns in Africa and even further.

The dashiki, kaftans, and African designs are a few examples of this attire. As previously mentioned, the majority of contemporary global fashion trends are actually influenced by African culture.

Fashion is not merely a component of the African economy; it also acts as a lens through which we may examine the cultural expression and the broader economic and social impacts of the creative economy.

Since the media is a force that transcends the present, it is the only way to maintain it. Strong relationships should exist among African retailers, suppliers, and customers in order to foster a sustainable Pan-African environment.