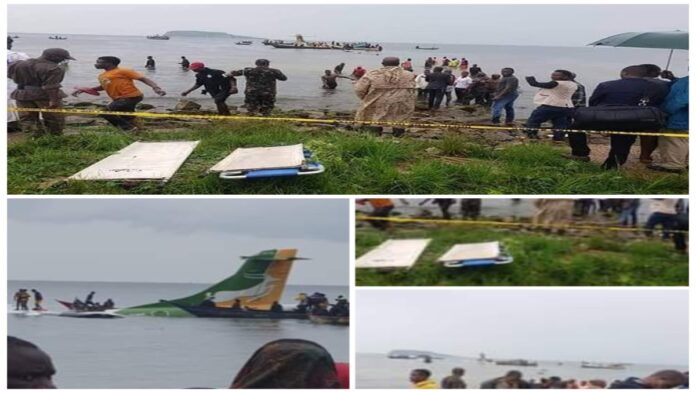 A Tanzanian plane crashed into Lake Victoria near the northwestern city of Bukoba.

More than 20 of the 49 passengers were rescued, according to local media reports, but these numbers have not been officially confirmed.

Rescue teams and local fishermen are on the scene looking for survivors.

The photos show the plane almost completely submerged, with only the brown and green tail above the water, surrounded by rescue teams and fishing boats.

One end of the Bukoba Airport runway runs alongside the shore of Lake Victoria, Africa’s largest lake.

The Precision Air flight from Das El Salam, the largest city in Tanzania, was supposed to fly to Bukoba via Mwanza when it reportedly encountered a thunderstorm and heavy rain.

Precision Air, partially owned by Kenya Airways, was founded in 1993 and operates domestic, regional and private charter flights to popular tourist destinations such as Serengeti National Park and the Zanzibar Archipelago.

In March 2019, an Ethiopian Airlines plane flying from Addis Ababa to Nairobi sank six minutes after takeoff in a field southeast of the Ethiopian capital, killing all 157 people on board.

In 2007, a Kenya Airways plane flying from Abidjan, Ivory Coast to Nairobi, the Kenyan capital, crashed into a swamp after takeoff, killing all 114 passengers on board.

In 2000, another Kenya Airways flight from Abidjan to Nairobi crashed into the Atlantic Ocean minutes after takeoff, killing 169 people while 10 survived.