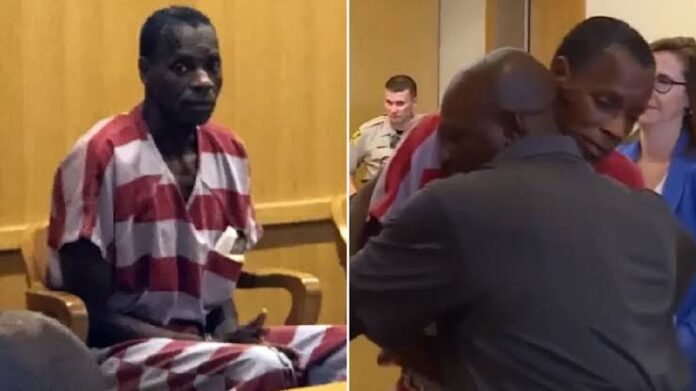 An Alabama man sentenced to life without parole after robbing a $50.75 bakery at age 20 has finally been released after more than three decades in prison.

Alvin Kennard, who was convicted of first-degree robbery, was 22 years old when he was first arrested in 1983.

Now, 36 years later, the 58-year-old is finally released after a judge ordered his release from Donaldson Correctional Facility in Bessemer.

Kennard was sentenced to a disproportionately harsh sentence under the former Alabama Criminal Offenders Customary Act, also known as the Three Strikes Act.

He had previously been sentenced to three years probation on three counts of second-degree theft related to a 1979 robbery.

The fourth conviction – for the bakery robbery, which was committed with a knife and there were no injuries – meant life in prison without parole.

Emotional friends and family stood in the courtroom at the very sensitive moment of his case review, raising their arms in celebration as District Judge David Carpenter re-assessed the case.

“We all cry,” his niece Patricia Jones told the WBRC. “We’re talking about being free for, I don’t know, 20+ years.”

Kennard, who previously worked in carpentry and construction, reportedly told the judge he wanted to work as a carpenter. He appeared in court in handcuffs and wearing a red and white striped prison uniform.
“He says he wants to get a job, he wants to support himself, and we’re going to support him,” Jones said.

Kennard’s attorney, Carla Crowder, executive director of the Alabama Appleseed Center for Law and Justice, said Kennard was “overwhelmed” after the new sentence.

“What’s extraordinary about Mr. Kennard is that even though he thought he was going to spend the rest of his life in prison, he really changed his life,” her family said, so he has incredible support.”

Crowder, who was called to Kennard’s case after being discovered by a compassionate judge, said “hundreds” of prisoners in similar situations are still being held because they don’t have lawyers.

“It is incredibly unfair and unjust that hundreds of people in Alabama are serving their lives without parole for non-violent non-murder crimes,” she added.